Ministers will be free to ‘dissent’ on abortion, Leo Varadkar says 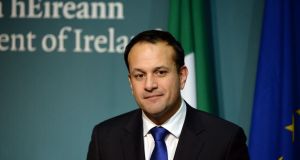 Ministers will be free to vote against holding an abortion referendum when the issue is considered in the Dáil, Taoiseach Leo Varadkar has said. Photograph: Cyril Byrne/The Irish Times.

Ministers will be free to vote against holding an abortion referendum when the issue is considered in the Dáil, Taoiseach Leo Varadkar has said.

Although the Cabinet will come to a collective decision on holding a referendum on the Eighth Amendment, Mr Varadkar has indicated that Ministers will be free to “dissent” from that position.

The Taoiseach was speaking at an end-of-year press conference in Government Buildings on Monday evening.

“What I would anticipate is Cabinet acting collectively, as it always does. So if we put a procedure or proposition to the Dáíl and Seanad, that will be a collective decision of the Cabinet,” he said. “That is not to say that people couldn’t dissent from that. I’m not sure if that makes any sense. But Cabinet can only operate collectively.”

The Government spokesman later confirmed that the Taoiseach intended to allow Ministers who participated in an expected decision to hold a referendum, to vote against the proposal in the Dáil and to campaign against the referendum, if that is their wish.

Fine Gael TDs have been promised a free vote on conscience grounds on the issue, but this is the first indication that it will extend to Ministers.

Normally Ministers who participate in a decision are expected under the constitutional doctrine of collective responsibility, to back that policy subsequently.

The Taoiseach also said his personal views would not determine Government policy on the issue.

“Obviously I have a personal view on this but I also hold a very important office of State and the law of the land isn’t going to be made according to my personal views,” he said.

The Taoiseach has previously expressed the view that the unborn have rights but last week said his views have evolved.

Mr Varadkar also said the Government would publish the heads of abortion legislation – a short summary of the intention of the various section of the Bill – rather than a full draft Bill, as previously expected.

This would be published in advance of the referendum to act as a guide to the sort of legislation the Government would bring to the Dáil if it is passed.

Asked if he thought the referendum would be passed, Mr Varadkar said: “That I don’t know, we must bear in mind that referendums are always difficult.

“While they start off being about the issues that are asked, often they go off on tangents and go into areas that aren’t germane to the issue and often there’s a lot of scaremongering in referendums,” he said.

Minister for Health Simon Harris is expected give an informal briefing at Cabinet on Tuesday on the “incredibly tight” timeline involved for a referendum in late May or early June.

Mr Harris and his officials have been involved in “scenario planning” for several months, in conjunction with the Attorney General’s office. They have looked at different eventualities that might have arisen from the deliberations of the Committee on the Eighth Amendment.

It is unlikely any substantive work will take place until mid-January. The first Cabinet meeting of 2018 will take place on January 10th with the Dáil returning six days later on January 16th. The Fine Gael parliamentary party meets the previous night to debate the committee’s report.

The report must be debated by the Oireachtas and, if approved, a Government decision will be required to draft and publish a Referendum Bill.

Once the Bill has been approved by the Oireachtas and passed into law, a referendum must take place not less than 30 days, and not more than 90 days, later. A Referendum Commission must also be established.