A large chunk of voters are in the middle: most favouring repeal, but many nervous 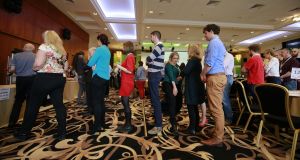 Will the process undergone by both the Citizens’ Assembly and the Oireachtas committee – where weeks of discussion and debate led to a more liberal position than might have been expected – be replicated in the country at large? Photograph: Nick Bradshaw

Repeated opinion polls have demonstrated an apparently settled view among voters that the Eighth Amendment should be repealed.

The Irish Times has asked voters their views on the issue in a variety of ways in polls over the last four years; all indicate a majority view in favour of changing the State’s strict ban on abortion.

Last week voters were asked straight out: will you vote to repeal the Eighth Amendment in order to allow the Oireachtas to legislate for greater access to abortion?

Other polls this year, and in recent years, have been consistent with last week’s findings. Voters believe that the current ban on abortion is too restrictive and want to see it changed.

That requires the Eighth Amendment be either deleted from the Constitution or amended. That is the question that will be put to the voters in the referendum next year: do you want to change the Constitution? At the moment all the polls are saying they do.

However, that is only half the picture. An important part of the forthcoming debate on the constitutional referendum will be what might replace the existing legislation if and when the Constitution is changed.

Repeated Irish Times polls have also found that while voters want the law changed to allow for greater access to abortion, they are cautious and often conservative about how far that change should go.

Polls conducted by Ipsos/MRBI for The Irish Times this year, last year and in 2013 have consistently found that a majority of voters do not favour the legalisation of abortion on request, along the lines of the British model.

It should be said that other polls, commissioned by Amnesty, one of the leading organisations campaigning for abortion law reform, have returned different findings. But Irish Times polls have been pretty consistent in their findings about where public opinion stands on the matter.

For example, in June this year, following the report of the Citizens’ Assembly, an Ipsos/MRBI poll found that the public agreed with many of the Assembly findings of the grounds for abortion: rape, a threat to the health of the woman, fatal foetal abnormalities, and so on.

But asked if they favoured the legalisation of abortion “where a woman believes she would be unable to cope because of her age or circumstances”, just 28 per cent said they would back such a move.

In October, asked if they would favour abortion on request up to 22 weeks in pregnancy, just 24 per cent said they would be in favour.

Mindful of this, the Oireachtas committee, the Government and ultimately the Dáil is likely to propose a change in the law that provides for a limited reform of the law – allowing access to abortion for any reason up to 12 weeks, but only in limited circumstances thereafter.

However, legislation proposed before the referendum can have no legal effect. It can only be a promise to legislate in the Dáil, which the Government does not control.

Future polls will no doubt find what the public thinks of this proposal. But ultimately, the state of public opinion at the end of the referendum will depend on the campaign itself. Two major uncertainties remain in that regard.

Will the process undergone by both the Citizens’ Assembly and the Oireachtas committee – where weeks of discussion and debate led to a more liberal position than might have been expected – be replicated in the country at large?

In other words, will people change their minds? Have they changed them already?

Or will the unease that a majority of voters feel about abortion harden into opposition to the entire repeal proposal?

The answers to these questions will be greatly influenced by the tone and conduct of both campaigns.

There is a large group of convinced repealers, somewhat greater than 30 per cent of the electorate. There is a smaller group of committed anti-abortion voters – perhaps greater than 20 per cent, but not by much. The rest are somewhere in between: most favouring repeal, but many of them nervous.