Naughten says he has told RTÉ there will be no increase, despite calls by Dee Forbes 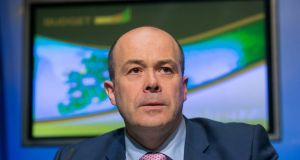 Denis Naughten TD said: “I have advised RTÉ of my position in the course of overall discussions on funding for the broadcaster.” Photograph: Gareth Chaney/Collins

Minister for Communications Denis Naughten has ruled out an increase in the TV licence fee from the current annual cost of €160.

Earlier this month RTÉ director general Dee Forbes said the price should increase to €175 in line with inflation. She said licence holders currently paid 44c daily and the increase would bring it to 47c a day.

Ms Forbes told the Oireachtas communications committee that the fee was in need of reform and modernisation. The current charge did not reflect changes to the media landscape, she said. A €15 increase would be worth an additional €15 million to the broadcaster.

Ireland has one of the highest licence fee evasion rates at about 16 per cent, and the RTÉ boss called for reform in the way the licence is collected.

Acknowledging the need for change in the collection process, the Minister, however, rejected any rise in price. “I am not considering any increase to the current TV licence fee,” he told Fianna Fáil TD Niamh Smyth.

Ms Smyth asked in a written parliamentary question if Mr Naughten would consult the public on the issue and if he had plans to increase the price of the licence.

The Cavan-Monaghan TD also asked if the Minister had met RTÉ specifically on the issue of the licence.

Announcing he had no intention of the increasing the licence fee, Mr Naughten said: “I have advised RTÉ of my position in the course of overall discussions on funding for the broadcaster.”

He told Ms Smyth that he had received Cabinet approval to amend the legislation to allow the collection of the licence fee to go to tender and the communications committee is currently examining the amendments under the Oireachtas pre-legislative scrutiny process.

The Government procurement office had also put out a “request for information to see what services the market may be able to offer in respect of TV licence fee collection”.

Mr Naughten added that “in the meantime there will be no change to existing TV licence fee arrangements and An Post continues to work as my issuing agent” in accordance with current legislation.