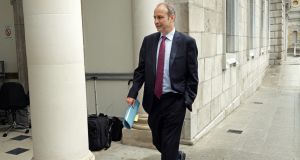 Fianna Fáil leader Micheál Martin has unveiled his frontbench for the 32nd Dáil. There are 17 male deputies and five female politicians in the in the 22 person team.

Jim O’Callaghan, a senior counsel and first time TD, will serve as justice spokesman, taking over the brief from Niall Collins who was a regular media presence for the party but will now focus on the subjects of enterprise and jobs.

Robert Troy will be responsible for shadowing Minister Shane Ross in the transport area and Thomas Byrne, who regained his Dáil seat in Meath East after a stint in the Seanad, will be education spokesman.

Galway East TD Anne Rabbitte is taking over the portfolio of children, where she will shadow Katherine Zappone.

Mayo TD Dara Calleary moves from enterprise to shadowing Minister Pascal Donohoe in the area of public expenditure and reform.

Mr Martin said his party had “driven forward the political reform agenda” after the election and facilitated the establishment of a minority Government with a confidence and supply agreement.

“The potential now exists for a parliament where good ideas can flourish and where good law, no matter where it originates, can be supported by a majority of representatives on a cross-party basis and can be enacted,” he said.

Mr Martin said he had sought to blend experience and new energy, “drawing on the diverse talents of our newly enlarged Dáil party”.

“We will be a responsible and constructive opposition party, supporting Government initiatives which we believe to be in the best interests of the nation, but resolutely opposing those we do not. Where we oppose, we will be bringing forward what we believe to be better and fairer alternatives and working to build consensus in this new Dáil.”

Mr Martin said the Government was wrong to abolish the role of minister for defence and “in downgrading the prominence of the arts”.

“For that reason I am appointing dedicated spokespeople to address both these portfolios. Given the crises unfolding in both areas, I am also appointing specific spokespeople on disability and mental health.”

“Having crafted the programme for government Fianna Fáil have tried to pull the ultimate political stroke by sitting on the opposition benches while Fine Gael implements its plan,” TD Jonathan O’Brien said.

“It is clear that Fianna Fáil cannot play the lead role in opposition while facilitating and rubber stamping everything coming from government. The real opposition front bench was announced by Gerry Adams last week. ”

The full Fianna Fáil frontbench line-up is as follows

Spokesperson on agriculture, food and the marine: Charlie McConalogue