Fianna Fáil must push onwards as other parties near leadership reshuffle 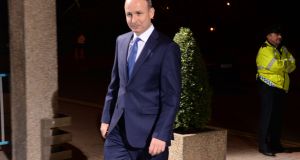 Fianna Fáil leader Micheál Martin: Perhaps the biggest challenge the party faces is maintaining its strength in the face of significant change among its biggest rivals. Photograph: Dara Mac Donaill

Six years ago, standing accused of handing the keys of the economy over to the State’s EU-International Monetary Fund bailout masters, Fianna Fáil was met by a storm of protest on the election trail.

After having their Dáil numbers destroyed at the 2011 general election, and facing a government with 113 seats, even the most hardened Soldiers of Destiny would not have countenanced the reversal of fortunes Fianna Fáil had experienced by the next time voters went to the polls.

At times its message had been unclear and its presence underwhelming, but Fianna Fáil leader Micheál Martin drove issues such as the plight of Garda whistleblowers and the crisis in accessing medical cards as he sought to rebuild the party during the last Dáil.

Last year’s election campaign offered the first real electoral test of Martin’s tenure as leader, and he passed it with flying colours as the party’s message appeared to hit home with voters.

While Fine Gael spoke of a recovery few had felt, Fianna Fáil talked of an “Ireland for All”. The message appeared to strike a chord with those who felt left behind by the Fine Gael-Labour government’s policies.

Martin was at the centre of Fianna Fáil’s campaign while Fine Gael and Sinn Féin attempted to hide their leaders. His face was plastered on almost every lamppost in the State in the lead-up to the party more than doubling its Dáil seat tally to 43.

Fianna Fáil may not have won the election, but it was a major turnaround considering the circumstances five years before.

However, the party now finds itself in a political straightjacket, bound by the confidence and supply arrangement it negotiated to prop up the Fine Gael-led minority Government. With one foot in Opposition and the other in Government, the party must balance its desire to be populist with a necessity to act responsibly.

Martin and Taoiseach Enda Kenny keep their distance, only making contact when crises loom. Increases to the State pension and reform of the rental market have created tensions between the two parties but the saga surrounding the treatment of Garda whistleblower Sgt Maurice McCabe recently brought the arrangement to the brink.

Fianna Fáil had the perfect opportunity to call an election but chose not to, a decision many of the grassroots questioned. Martin made clear that was Fine Gael’s last chance, and that he and his party would not be as gracious again.

Many in Fianna Fáil say a number of key issues will be placed firmly on the agenda over the coming months, and that Martin will pull the plug if concrete action is not taken on these within 12 months. It is targeting improvements in housing and homelessness, support for rural Ireland, health and water charges.

Fianna Fáil believes it can win the next general election if it chooses the right moment. Support for it is increasing in the polls but there are challenges ahead.

One is the tug of war it is engaged in with Sinn Féin. Younger members of the party, and indeed sometimes their leader, are constantly looking to their left as they shape their own policies as, for example, highlighted by its handling of the water charges question.

Martin also faces difficulties in maintaining discipline within Fianna Fáil. He runs a tight ship, insisting members attend parliamentary party meetings and scolding those who are late. However, as he replaces the old guard with a younger crop, that discipline may be harder to uphold as ambition in the ranks grows.

Perhaps the biggest challenge Fianna Fáil faces in the short term is maintaining its strength in the face of significant change among its biggest rivals. Kenny is expected to stand aside as leader of Fine Gael and many expect Gerry Adams will step aside as Sinn Féin leader.

Both parties will lose what some see as their biggest liabilities, and Martin’s tenure will, no doubt, come under renewed focus.

With the weight of an expectant party on his shoulders, further electoral success is the Fianna Fáil leader’s only option.