The Disclosure Tribunal has opened at Dublin Castle. The possibility that senior garda management may have responded with “malice” to whistleblowers is a central concern for the new tribunal, its chairman Mr Justice Peter Charleton has said. 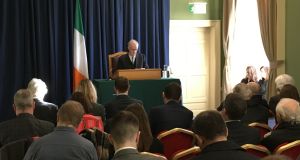 Tribunal chairman Mr Justice Peter Charleton has surprised many by the speed at which the first sitting has been organised. Photograph: Bryan O’Brien/The Irish Times

The possibility that senior garda management may have responded with “malice” to whistleblowers is a central concern of the new tribunal, its chairman has said.

In an opening statement in Dublin Castle on Monday morning, Mr Justice Peter Charleton said the tribunal will investigate whether this possible malicious response included people who expressed concern about garda performance being targeted and attacked as to their family life.

The possible malice might have also have included their being attacked as to their “adherence to basic standards of human decency”.

Mr Justice Charleton said the tribunal had been asked to urgently inquire into a range of matters that hinge on how top officers react when concerns are aired about garda performance and whether this reaction has, possibly, “and this is now unknown”, been one not only of distaste but of “active and thought-through malice whereby media briefings take place against individuals who rock the boat.”

Mr Justice Charleton said “truth is supreme” and the tribunal was here to establish the truth.

“This tribunal is a drain on the resources of the Irish people, and it is paid for by their submission to the democratic structures of which taxation has been a central part in our tradition.

“Every lie told before this tribunal will be a waste of what ordinary men and women have paid for through their unremitting efforts. Every action of obfuscation, of diversion of focus, and of non-cooperation is unwelcome for that reason.”

He said the tribunal had no pre-conceived notion as to who is a villain and who is a victim, if there are such. What the tribunal finds might not be to everyone’s taste, he said.

Anyone who is a witness to the matters before the tribunal should contact it at Dublin Castle, Dublin 02Y337, he said. Statements should be detailed and be received by close of business on March 13th. Anyone wishing to assert professional or journalistic privilege should indicate that in their statement.

Once the volunteer statements and other material have been examined, counsel for the tribunal will make an opening statement. The hearing of evidence will then follow after a pause.

The Morris Tribunal investigated allegations of garda corruption and other matters and as much of the focus of that tribunal was on the Donegal division of the garda “it may have been possible to regard the findings and recommendations of that tribunal as somehow isolated from Ireland and its police force by some feature of geographical remoteness.”

Mr Justice Charleton spoke at length about how he envisaged the tribunal progressing, including how witnesses would be examined by counsel.

He said he is studying the transcript of the O’Higgins Commission and invited submissions on the issue of legal privilege in relation to instructions given to counsel.

The tribunal has been asked to report on Ms O’Sullivan’s instructions to counsel at the private commission proceedings, which investigated Sgt McCabe’s disclosures.

He has also invited submissions on journalistic privilege. The tribunal has been asked to report on whether the media was used as part of the alleged smear campaign against Sgt McCabe.

‘Degree of confidence’ in O’Sullivan

Fianna Fáil’s Justice spokesperson Jim O’Callaghan said on Monday he believed the Commission of Inquiry could be completed within nine months.

“If people are prepared to co-operate, it should be able to get it done,” Mr O’Callaghan told Newstalk Breakfast on Monday.

The fact that some of the key participants are members of the gardaí will mean that as servants of the State they will not be actively seeking to undermine the tribunal, he said.

He said Fianna Fáil had the same “degree of confidence” in Ms O’Sullivan as Josephine Feehily, chair of the Policing Authority.

Mr O’Callaghan said he thought the Garda Commissioner should give her evidence in the early part of the tribunal, adding that he also believed the tribunal should be televised due to public interest.

The Government has said Ms O’Sullivan has denied the allegations against her and is entitled to a fair process. Ms O’Sullivan has repeatedly said she had no knowledge of or involvement in any alleged smear campaign.

It is alleged in a protected disclosure made by the former head of the Garda press office Supt David Taylor that he was instructed by senior Garda management to negatively brief the media and others about Sgt McCabe.

Before he became a whistleblower, Sgt McCabe had been the subject of an allegation that he sexually assaulted a colleague’s six-year-old daughter.

The matter was investigated by the Garda and the Director of Public Prosecutions (DPP) directed no prosecution should take place.

The allegation was made in late 2006 and the DPP directed a few months later that no prosecution should take place.

Sgt McCabe began his whistleblowing in 2008, at first into alleged Garda malpractice in the Cavan-Monaghan division.

The tribunal will seek to establish whether senior Garda members ran a campaign to undermine Sgt McCabe by briefing the media and others about the 2006 allegations against him.