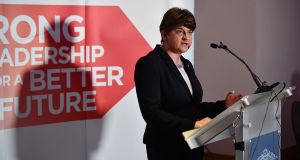 DUP leader and former first minister Arlene Foster faced scrutiny last week after claiming she did not know how much the party had been given by a then-unnamed mystery donor. File photograph: Charles McQuillan/Getty Images

DUP leader Arlene Foster has defended her handling of questions around a major donation that bankrolled the DUP’s £425,000 pro-Brexit campaign.

The former first minister faced scrutiny last week after claiming she did not know how much the party had been given by a then-unnamed mystery donor.

Critics questioned how the party leader could not have been familiar with the detail of such a huge single donation - a cash boost that enabled the DUP to promote its Leave message on a UK-wide basis, including the purchase of a four-page Vote To Leave EU advert in the British Metro newspaper.

Ms Foster said giving a ballpark figure in the BBC interview would have only drawn criticism.

“I didn’t have in my mind the very specific figure that we had been given,” she said.

“I wasn’t going to enter into the realms of saying what it was and what it wasn’t.

“I knew by that stage that we were speaking to the individuals in question and we were hopeful that we were going to be as open and transparent as we have been.”

Ms Foster accused the media of not subjecting other parties to the same examination around their finances.

“It’s just a pity that Sinn Féin and republicans aren’t as open and transparent about the millions of pounds, the million that they have received from America through the Republic of Ireland, ” she said.

“Yet when we get a donation for a completely legitimate purpose, to fight the European Union campaign, and we have shown everybody where it came from and what it was spent on, people are still asking questions of us and not asking any questions of the other parties.

“I find that bizarre in the extreme. It leads us to ask questions about what the media are doing in this campaign.”