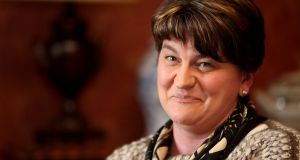 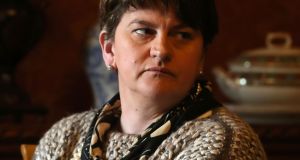 Arlene Foster has said any suggestion she is attempting to avoid pre-election media scrutiny is “complete nonsense”.

The DUP leader faced criticism last week when she declined to take press questions after launching her party’s manifesto, citing “man flu”. None of her party colleagues stepped in to answer media queries on the DUP’s policy positions.

“I have made myself available to each and every one of the media when they have asked to speak to me,” she said on Monday. “It’s complete nonsense to say we are trying to bypass the media. I don’t know where this comes from – it is a nonsense.

“I genuinely wasn’t well last Monday. I had to go the doctor on Tuesday and I am still recovering from it. So it is an absolute nonsense to suggest I am bypassing the media. It’s nonsense, rubbish. I have never hidden from the media and I am not going to start now.”

The DUP leader warned Northern Ireland’s constitutional future would be thrown up in the air if Sinn Féin was to emerge from the Assembly election as the largest party.

Mrs Foster said such a result would see the UK government come under renewed republican pressure to hold a referendum on a united Ireland.

She said she made “no apologies” for adopting a campaign line that has been branded as another version of “project fear” by political rivals.

“I am not going to apologise for the fact there’s a huge threat to Northern Ireland,” she said. “People have talked about scare tactics and talked about fear, the reality (of a Sinn Féin victory) would be much worse for Northern Ireland than just talking about it. People should be concerned, they should be worried.”

The region faces an election on Thursday after Sinn Féin pulled the plug on the devolved institutions in protest at Ms Foster’s handling of a botched green energy scheme that had left Stormont facing a potential overspend of almost £500 million.

Ms Foster claimed the renewable heat incentive (RHI) affair was not the republican party’s real motivation. “They wanted to take me out, they wanted to weaken unionism, I understand all that, but this election is much more important than one individual,” she said.

Rivals have also claimed her repeated reference to Sinn Féin president Gerry Adams, who is not standing in the election, is an example of using a “bogeyman” to galvanise the unionist vote.

Ms Foster defended her approach, also dismissing those who highlight the fact Stormont’s First Minister has exactly the same power as the Deputy First Minister.

“We must be the only country in the world where it doesn’t matter who wins the election,” she said. “That’s just wrong, of course it matters who wins the election. We are not just talking about the system of government, you are also talking about what it says to the world, what it says to our government about where we are in terms of a border poll.

“If they have the larger number of seats in the Assembly they will push for a border poll. That will be very divisive, very destabilising for Northern Ireland at any time, but particularly at a time when we are dealing with our exit from the European Union.”

Of the DUP’s desire to retain its position as the biggest party, she added: “It’s not just about the First Minister’s office, it’s about how we drive the agenda forward for Northern Ireland, it’s a recognition that the majority of people in Northern Ireland want to stay in the United Kingdom.

Meanwhile, Colum Eastwood has said Northern Ireland’s devolved government will be endangered if the election does not produce change.

The SDLP leader appealed for the 50 per cent who normally did not vote to help snub the strained DUP and Sinn Féin partnership and deliver power-sharing in spirit through the SDLP and UUP.

UUP chief Mike Nesbitt has faced criticism from within his own party after he said he would select the nationalist party as his second preference on the Assembly election ballot paper on Thursday.

“I genuinely do think devolution is under enormous stress and threat and I just think it is worth fighting for,” said Mr Eastwood. “We are in a very dangerous place and I think the result on Thursday will determine what kind of future we have.

“I think if we return the same people in the same way with the same number of seats and the same power bases, then it is going to be very difficult to form a government.”

Next stop the Champs-Elysées in green for Sam Bennett