The new politics: 10 changes it has brought to the Oireachtas 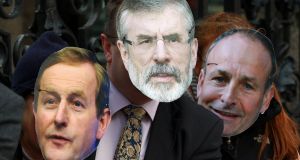 The 32nd Dáil is very different from any of the parliament’s previous iterations. Much of the change stemmed from last year’s inconclusive general election result, which left the State with a minority administration and forced major changes to how the Oireachtas goes about its business.

Here are 10 big changes that have occurred in the engine room of Irish politics since last year.

There have been a few minority governments before, but none quite like this. Fine Gael came in 28 seats short of a majority and, despite picking up support from Independent TDs, it now relies on Fianna Fáil abstentions to survive key votes in the Dáil.

That support is subject to a confidence-and-supply agreement, a three-page deal reached between the parties that majors on Irish Water but also includes nods to key Fianna Fáil issues.

To the disappointment of the left, the two major parties have not merged officially. But in an Irish solution to an Irish problem, they merge unofficially when it suits.

Both parties, and their shared values, have been attacked, particularly when the European Commission’s judgment on Apple’s tax affairs went against Ireland last year.

The current system may mark the beginning of a northern European-style deal-making parliament. Fianna Fáil, which wields significant power from the Opposition benches, is conscious that this could be the way of the future and has been in no hurry to bring down the Government, given that it may itself one day have to rely on support from Fine Gael in Dáil votes.

Nevertheless, the threat of an election is ever-present, even if the deal between Fine Gael and Fianna Fáil was designed to run for three years. In northern European countries the average length of parliaments is a little more than two years. Nobody sees this Government lasting longer than three of the five years it could go on for.

In 1987 Charles Haughey became the taoiseach of a minority government, but pulled the plug on the administration in 1989 after losing nine votes.

Our current parliament is going to smash all records for a government losing Dáil votes, have already lost 13, including four in a single day this February. It would have lost more but has on occasion accepted Opposition Bills, knowing it would have lost a vote otherwise.

This trend highlights a fundamental problem with the so-called new politics. If a minority government is to implement radical change, opposition approval is a must. This invariably means that policy is diluted and that most of the legislation passed is populist by nature.

The system of voting has also changed. Instead of votes taking place at the end of a debate, they now happen during a “voting block”, which takes up most of the Dáil’s proceedings of a Thursday morning.

In the previous Dáil there was only one piece of legislation coming from the Opposition benches each week. That figure has now risen to three.

Most of these Bills easily pass their second stage in the Dáil, but then get bogged down at the subsequent committee stage. As of now, it appears that no Bill from the Opposition will become law during this Government’s time.

With no guillotine being used to speed up (or cut short) debates in this Dáil, it means the pace of new laws being passed has been excruciatingly slow. To accommodate committees, the Dáil sits only in the afternoons, thus reducing the time to discuss legislation.

And if you look at the substance of the legislation, there are few major new Bills, and no controversial ones. This is one of the big problems of the new politics: it gives rise to a massive number of old-school fudges.

This has been a good innovation and was long called for. Instead of the Ceann Comhairle, the chair of the Dáil, being a creature of the Government, Fianna Fáil’s Seán Ó Fearghaíl became the first to be elected by secret ballot.

It is not the Government but Ó Fearghaíl and the business committee (comprised of party whips) that decide the business of the Dáil, which represents a big shift in the balance of power from the executive to the Oireachtas.

As someone who came from the Opposition benches, Ó Fearghaíl has not been subjected to charges of being partisan for the Government, a claim regularly made against his predecessors.

Until this Dáil, seven TDs were required before a political group could be formed in the chamber. A rule change has meant that the minimum number now needed to create a group has fallen to five, and there is no restriction on the number of technical groups that can operate in the Dáil.

All are entitled to speaking time, private members’ motions and Bills, and all have the right to put questions to the Taoiseach at Leaders’ Questions.

We now have five such groups: Independent Alliance; AAA-PBP; Independents 4 Change; the Greens and Social Democrats; and the Rural Alliance.

Another upshot is that smaller groups have the same amount of speaking time as the biggest parties.

This has led to claims of inequity from Fianna Fáil and Fine Gael, saying that tiny parties are getting disproportionately large swathes of speaking time. They have tried to reverse this at the business committee, so far without success.

The Government’s margins are incredibly tight. There are 50 Fine Gael TDs, and the party has the support of seven in-Government Independents, as well as Michael Lowry.

When Fianna Fáil abstains, the Government never has more than a vote or two to spare if there is a full Dáil.

In the past, the governing party had a pairing arrangement with the main opposition party.

If a government TD was sick or on official business, an opposition TD would absent himself or herself from the Dáil for the vote, in order to equalise matters. But that has become redundant in this Dáil, given that Fianna Fáil can’t offer pairs as the Government needs it to support or abstain in votes.

There is no arrangement in place with Sinn Féin. Senior Government figures, such as Enda Kenny and Michael Noonan, regularly have to travel abroad and Government Chief Whip Regina Doherty has had to forge informal and ad-hoc deals with Independents such as Noel Grealish and Mattie McGrath, and Sinn Féin whip Aengus Ó Snodaigh, to prevent votes being compromised.

8 Whips and no whips

Every week Doherty, as Chief Whip, has to look at the Dáil agenda and make a call on what might be precarious for the Government.

Often she has to tell Ministers they will not be able to travel abroad on official business because it will mean a lost vote. This month Leo Varadkar had to take an early flight home from business in South America to vote on a Dáil confidence motion.

This has given rise to other niggly problems. During the voting block on Thursday, a Minister is usually addressing the Seanad. At present their contributions are interrupted a few times each hour to allow them to attend the Dáil for votes.

Doherty imposes a three-line whip (“you must attend” underlined three times) on her TDs for most votes. The Whip’s Office has had to become increasingly vigilant in ensuring that Government-supporting TDs are aware of, and present for, votes. They get more messages than the average teenager, especially in the run-up to votes.

The Government’s problems are compounded by the fact that the Independent Alliance and its figurehead, Shane Ross, do not believe in obeying the whip, which occasionally creates difficulties on certain votes.

The previous Dáil saw the number of Oireachtas committees slashed, which left a bit of a mess. The number has been increased in this Dáil, with one committee to match each department.

In addition to the Public Accounts Committee, a few other overarching committees have been formed, including one on budgetary oversight and another on the future of health provision.

Usefully too, there are ad-hoc committees set up to report on important current issues, such as water, housing, insurance and the Eighth Amendment of the Constitution, which prohibits abortion.

Moves to avoid clashes between Dáil time and committee time are welcome, but the downside is that Dáil hours are shorter now than previously, which means less time for debating legislation.

Another good innovation is that the chairs of the committee are now selected on the d’Hondt system, with a fairer distribution of posts between Government and Opposition TDs.

Fine Gael backbenchers have found themselves being rushed from pillar to post in this Dáil. A quick look at the Government numbers explains why. There are 27 Fine Gael Ministers and Ministers of State, leaving only 23 backbenchers.

With the huge number of committees, backbench TDs find themselves dividing their time in the mornings between the four basement rooms on the Leinster House 2000 annex where committee meetings take place.

There are more than 20 committees and Fine Gael needs a few members on each, for voting-strength purposes. One Fine Gael backbencher, Jim Daly, is reputedly serving on 10 different committees, which sounds like a major ask.