‘I am elected to deliver for all citizens,’ says Michelle O’Neill 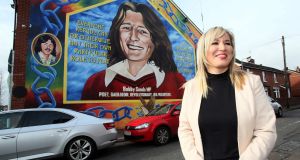 Sinn Féin’s leader in North Michelle O’Neill: “My job and the job of political leadership is to try to heal all those wounds of the past, to try and build the bridges, to try to bring us into the modern era.” Photograph: Paul Faith/AFP/Getty

Sinn Féin leader Michelle O’Neill is out canvassing in north Belfast, in a commercial part of the Antrim Road, calling into the chemist, the carpet seller, the dry cleaners, the butcher’s and other shops.

Storm Doris is hitting Ireland and one can’t resist wondering is this new leader of Sinn Féin in Northern Ireland – known as Michelle Doris before she married Paddy O’Neill – about to kick up an electoral tempest on voting day next Thursday.

Whatever about Storm Doris, O’Neill says she is a force for good: “No one has anything to fear from me and I think that people will see over time that I am someone who is elected to deliver for all citizens, and elected to make a difference. I want to drive change and bring us into the modern era.”

There’s a team of a dozen canvassers with her as well as the two Sinn Féin candidates, Gerry Kelly and Caral Ni Chuilin, both former ministers and both former IRA members.

Every vote won and every seat held or gained will count in the expected political negotiations after polling next Thursday, especially if Sinn Féin narrows the gap between it and the DUP, or in some extraordinary circumstances it overtakes the DUP.

The number of seats in each of the 18 constituencies has been reduced from six to five and one of Sinn Féin’s two outgoing Assembly members could be at risk - with Ni Chuilin probably the more vulnerable.

“What, you don’t want me photographed? Am I not photogenic enough?” he mock-protests.

“Up Sinn Féin,” he adds, making his allegiance clear.

O’Neill shoots him a good smile.

She then poses for a shot with two workmen in hard hats. They walk away contented. “I suppose you’re heading off to sign on,” jokes one of the canvassers, Brendan Bik McFarlane, another veteran influential republican.

When elections near the finishing line, candidates can get edgy, with weariness and nervousness over how it will all pan out taking their toll.

Martin McGuinness is, of course, missed from the fray but Kelly and Ni Chuilin are sure O’Neill has brought vigour and purpose to this contest.

Kelly, who served as a junior minister, also talks about a vibrancy among the voters triggered by the “cash for ash” debacle but also by Sinn Féin voters warming to its fresh, female, 40-year-old leader.

O’Neill has been on the go since early morning so the entourage halt for some lunch in Sylvester’s café on the Antrim Road, which allows time for an interview. It’s all a bit rushed and frenetic so not ideal, but O’Neill answers some of the key questions on this campaign, and more particularly on what Northern Ireland may be facing into politically after the votes are counted.

There is some puzzlement why Sinn Féin has made just one red-line issue in this election: that if DUP leader Arlene Foster is any part of the Northern Executive ahead of the conclusion of the public inquiry into the Renewable Heat Incentive (RHI), then Sinn Féin won’t be in the Executive. In that eventuality, under the joint rules of the Executive Office, there will be no Executive.

But the inquiry is expected to take at least six months which would mean a lengthy period of British direct rule if the DUP sticks by its leader, which it has indicated it will do. Is that what Sinn Féin wants?

No, says O’Neill. “I never for one minute suggested that it is up to me to dictate who leads the DUP. but it definitely is in our gift to decide who we go into government with.”

Yet there is a suspicion that Gerry Adams and the Sinn Féin leadership don’t want an early return of the Northern Executive – that as some Sinn Féiners have admitted, they couldn’t care less “if Stormont never returned”; that as some unionists claim, Sinn Féin just doesn’t want Northern Ireland to work.

“We have always been consistent in trying to make the institutions work,” insists O’Neill. “This election is not about Orange and Green, it is about RHI. What I keep saying and I am genuinely absolutely 100 per cent committed to this: what I win in this election I win for everybody. I want to deliver good politics for all of our citizens out there, and I think we can do that if people come at it with the right approach.”

But no Foster in government? “No one in their right mind would support Arlene Foster while she has this cloud hanging over her.”

The DUP has argued that it is a bit rich of Sinn Féin to demand Foster keep out of government, if perhaps temporarily, considering there was no DUP demand for Martin McGuinness to stand down as deputy first minister after the PSNI and MI5 said IRA members were involved in the murder of Kevin McGuigan, and that the IRA army council still existed.

O’Neill bats this away as another diversionary exercise by the DUP: “This is Arlene Foster once again attempting to deflect attention from the RHI scandal. This election was caused because of the RHI scandal and the DUP’s actions which will potentially cost the public purse £500 million. The people must have their say.”

O’Neill and many other Sinn Féin people have accused Foster of high-handedness and disrespect on issues such as the Irish language and powersharing. But could she not make allowances for how she might have some deep-rooted antipathy to republicanism? After all the IRA almost murdered her and her father in separate attacks in Co Fermanagh.

O’Neill responds that “many people were impacted by the conflict” and that it is “still a real issue for many, many people, not just Arlene Foster”.

“There are particular personal circumstances for a lot of people but what we need to do is to deal with the legacy issues, deal with the past, help heal the wounds, help understand.”

O’Neill has cast herself as a shift from the past, as a new generational leader. But that can be problematic too, considering that last week she attended a commemoration in her native village of Clonoe in Co Tyrone for four young IRA members shot dead by the SAS 25 years ago – a decision sharply criticised by unionists.

“I did have to go to the Clonoe commemoration,” she says. “It was to remember in a dignified community setting, to come together and to talk and remember the lives of four young men that I knew personally and I grew up with.”

Some will understand that pull between the violent past and the political present but there was also criticism that she repeated the stock republican line, that “there can be no hierarchy of victims”. But, sad as any death is, surely there is a distinction to be made between four young men on IRA “active service” who were ambushed after a machine gun attack on Coalisland RUC station, and, say, young children killed by the IRA – and that there is a hierarchy of victims?

“I don’t agree. There is absolutely no hierarchy of victims and never can be,” she says. “We were in a conflict situation. Whose hurt is worse than anybody else’s? Grief is grief. My job and the job of political leadership is to try to heal all those wounds of the past, to try and build the bridges, to try to bring us into the modern era where we can actually help people to deal with the legacy issues and move on.”

As the short interview wraps up, O’Neill says the campaign is going well, that she has canvassed all over the North, and that while she would never presume to take the electorate for granted or predict how many seats Sinn Féin might win, she and her candidates were “fighting a strong campaign and getting a strong reaction”.

She says her friend and mentor Martin McGuinness is still getting treatment for his illness and that he “offered me advice all my life and continues to do so – we are hoping for the very best for him”.

As for when the Sinn Féin president Gerry Adams might hang up his spurs? “Gerry and Martin have both said that we are a party in transition. I am sure change will come in time and that’s up to Gerry and the collective leadership of Sinn Féin to say when that happens.”

And does O’Neill think he is still doing a good job? “Absolutely, of course he is.”