Britain’s foreign minister Dominic Raab says that he thinks the EU is concerned that the UK "might do rather well" after leaving the bloc. Video: Reuters 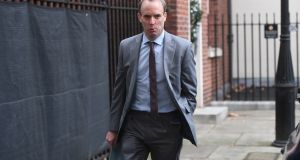 The European Union has found “letting go of its control over the UK” very difficult, British foreign secretary Dominic Raab has said.

Mr Raab, speaking as a the United Kingdom and the European Union tried to agree a post-Brexit trade deal, said the UK wants to be “treated like any other independent self-respecting democracy”.

“ If the EU can accept that at a political level then there’s every reason to be confident, but there is still I think a long way to go,” Mr Raab told Sky News’ Sophy Ridge On Sunday programme.

The talks remain difficult, a British source said on Saturday night, as the two sides sought a way to reconcile EU demands for guarantees of comparable standards in the UK in exchange for free single market access, with London’s desire for autonomy to diverge.

British prime minister Boris Johnson and European Commission president Ursula von der Leyen are to speak on Sunday to decide whether to continue negotiations to reach a trade deal and avoid a damaging shift to default terms.

Mr Raab said the UK had worked “very hard” at a technical level during the recent negotiations in Brussels.

“I called in to check in with our team in Brussels, they’ve worked incredibly hard.

“You remember the PM has made clear we want to leave no stone unturned, so we’ve been at it very hard at the working technical level, with all the usual jousting of positions

“But what really matters is what the EU is willing at a political level to commit to.

“There’s a conversation that Ursula von der Leyen, the president of the (European) Commission, will have with the prime minister later today — that’s when we’ll know.

“But I think we need to be really clear there’s two fundamental issues at stake — the issue of fisheries and the issue of the so-called level playing field.

Mr Raab said there was no exact time he could give for the phone call between Mr Johnson Ms von der Leyen, saying it would take place “later on today”.

“But what ultimately is required at this eleventh hour of the negotiation is moving the political logjam. That can only happen at the level of the prime minister and Commissioner von der Leyen.”

Asked whether talks could continue past Sunday, Mr Raab said: “I can’t close the door on it but I think there is a way that the EU’s got to go to give us the reassurance on those two points.

“Of course if we’re 99 per cent there on the outstanding issues, you wouldn’t want to leave any stone unturned but I think it’s quite a high bar. ”

He said the EU has “got to come to terms” with letting the UK gain independence.

“But actually, we’ve gone into this with a spirit of pragmatism, of optimism, good will and what we’ve just found in the last analysis and at the last stage the EU has found letting go of its control over the UK very difficult — I think emotionally and politically if you like, they’ve got to come to terms with that.”

Mr Raab also warned that French fishing boats will have “zero access guaranteed” to the UK’s waters if there is no trade deal.

Asked about navy ships patrolling the waters, he said: “The bottom line is actually if we do leave on WTO terms we’ll be an independent coastal state. Of course we’re going to enforce our waters around fisheries and whatever else.

“And of course for the French and others, that will mean — you know, forget those outlandish terms that they were asking of us — their fishing industries would have zero access guaranteed.” - PA