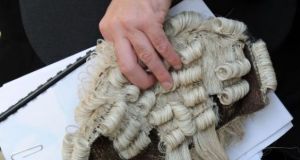 Under the current system, barristers and solicitors apply to the Judicial Appointments Advisory Board. File photograph: Getty

The Government is to ditch proposals by former Independent minister Shane Ross for a 17-member judicial appointments commission with a lay majority.

At Tuesday’s Cabinet meeting, Minister for Justice Helen McEntee will recommend a smaller commission to Government which will have neither a lay nor judicial majority.

The draft Judicial Appointments Commission Bill was not due to be published until early 2021, but was expedited after the political controversy surrounding the appointment of Supreme Court Judge Séamus Woulfe.

It is understood Ms McEntee will seek approval to set up a nine-member commission, comprised of four judges, four lay people and the attorney general of the day.

However, a fundamental feature of the draft Bill is the attorney general will not have a vote.

That will mean there will equal voting representation between the four judges and the four lay people. While the chief justice will chair the committee, he or she will have no casting vote. If the commission is deadlocked, it will be asked to retake the vote.

Another key change is that serving judges will be required to apply to the commission for vacancies, alongside practising lawyers.

Under the current system, barristers and solicitors apply to the Judicial Appointments Advisory Board (JAAB), while serving judges indicate their interest in being promoted to a higher court to the attorney general.

The new commission will forward a list of names to the minister for justice, who will then decide on a single recommendation to cabinet. Under JAAB, as many as seven names were forwarded, but that number will be reduced under the new legislation.

In its latest report, GRECO, the anti-corruption committee of the Council of Europe, expressed concern about a lay majority.

Meanwhile, the Cabinet will also discuss the Childminding Action Plan, which will be brought by Minister for Children Roderic O’Gorman.

The plan, which will be published in the New Year, will seek to extend the regulation and financial supports for childminders who work in the home, rather than in a dedicated childcare setting.

It will also accelerate access to subsidies for childminders through the State’s National Childcare Scheme (NCS), as well as developing training programmes for them.