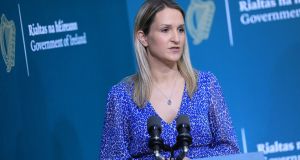 Minister for Justice Helen McEntee requested that Séamus Woulfe’s appointment to the Supreme Court be taken at a Cabinet meeting at least five days before she consulted with the Taoiseach, the Tánaiste and the Green Party leader on the matter.

A draft memorandum to Government seeking approval to fill the judicial vacancy was approved by Ms McEntee on July 6th, a little over a week after her appointment to the justice portfolio.

A speaking note was also prepared for the Cabinet meeting that day “in relation to an appointment to the Supreme Court”, according to internal Department of Justice correspondence and documents released to The Irish Times under freedom of information legislation.

The correspondence shows that Ms McEntee wanted the appointment to be made at the meeting of Ministers that afternoon. However, shortly after midday an official wrote in an email that the matter would not be taken at Cabinet that day.

Another official replied: “Not sure whether this is good news or bad news but main thing is we were not the blockage!”

The disclosure will bring renewed focus on Ms McEntee’s role in the process leading up to the appointment of the outgoing attorney general to the role.

In her statement to the Dáil on the controversy last month, Ms McEntee said that between July 11th and 14th she informed Taoiseach Micheál Martin, Tánaiste Leo Varadkar, Green Party leader Eamon Ryan and Attorney General Paul Gallagher of her intention to propose Mr Woulfe for the position.

However, those first contacts were made five days after her request that the matter be dealt with at the July 6th Cabinet meeting. There is no reference in her Dáil statement to contacts with those office holders in advance of that Cabinet meeting.

Mr Varadkar confirmed in November that he told Mr Martin and Mr Ryan informally just before the new Government was formed in late June that Mr Woulfe had been recommended by the Judicial Appointments Advisory Board (JAAB) as being suitable for the role.

In her statement to the Dáil, Ms McEntee said the draft memorandum on the appointment was submitted to her office on July 6th but she did not mention to the House her request to officials that Cabinet deal with the appointment on that day.

A spokesman for Ms McEntee said: “The Minister initially asked for it to be put on the agenda, having been told it was urgent, but did not proceed at that point due to her desire to consider all names before her for recommendation to the Supreme Court.

“The Minister has said she took her time before bringing a name to Cabinet at a later date and that is what she did,” added the spokesman.

Ms McEntee had told the Dáil that the submission included details of the recommendation that had been made by JAAB, expressions of interest from serving members of the judiciary and the names of all other judges eligible for the role.

The urgent status was accorded because of two letters received from Chief Justice Frank Clarke in February highlighting the unfilled vacancy.

An email sent by a Department of Justice official on July 6th stated: “The Minister has sought to have this included in today’s Cabinet meeting and we have submitted a request to Taoiseach’s [department] for approval.

“In the event that permission is given, can you please provide speaking and briefing ASAP.”

Another official wrote: “I was just on to the Taoiseach’s office to let them know the SC appointment was going to Cabinet today. From talking to them it seems unlikely there will be a ceremony but they are going to check and confirm for us tomorrow.”