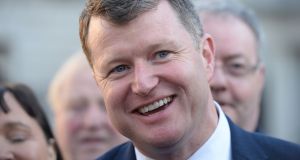 Fianna Fáil Senator Malcolm Byrne: “Ministerial appointments should be on the basis of ability regardless of where a person represents.” Photograph: Dara Mac Donaill

Mayo has been the best-represented county at Cabinet, excluding Dublin and Cork, since independence, an analysis by a Fianna Fáil Senator has concluded.

Malcolm Byrne examined the line-up of every Cabinet since 1922 and the constituencies represented by the 200 TDs included in them. Apart from Dublin (with 69) and Cork (17), Mayo topped the league table of Cabinet representation with 12 senior ministers. Per head of population, Byrne says, Mayo has been the best represented county at the Cabinet table.

His analysis also found that the western counties of Limerick (with nine ministers), Galway (seven) and Clare (seven) make up the top six in the league table of Cabinet representation by county.

There was also criticism from the wider western region about the lack of a Cabinet member from the area, with one local newspaper calling it “a cabinet fit for Cromwell”.

Mr Byrne said, “Ministerial appointments should be on the basis of ability regardless of where a person represents.”

“A county team or a national squad is not selected on the basis of every club being represented. I can understand personal disappointment but the focus for all in politics now though must be on building economic and societal recovery.”