‘The economic crisis that is coming could be very divisive,’ Varadkar tells US event 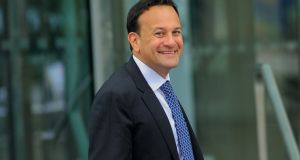 Tanaiste Leo Varadkarsaid: The country was very united during the pandemic. The economic crisis that is coming could be very divisive” . Photograph: Gareth Chaney/Collins

Tánaiste Leo Varadkar has warned of a “coming economic crisis” that could be “very divisive” for the country, as he set out the economic challenges facing Ireland in the wake of Covid-19.

Speaking during a virtual event hosted by the Washington-based Atlantic Council, which was also addressed by the prime ministers of Serbia and Luxembourg, Mr Varadkar said that Ireland had been very badly affected by Covid-19 , particularly in nursing homes but had now got the number of new cases to below ten on most days.

“For us the economic situation is very worrying,” he said. “If you include subsidised employment and government schemes and so on, we’re well over 20 per cent unemployment now – we had full employment in February — so it’s a very serious economic crisis and one that’s very unequal. It’s the private sector workers who have lost their jobs – whereas the public sector did not - and maybe younger people and migrants in precarious employment who lost their jobs, whereas people working for big companies, multinationals, in the professions, in the public service, have been largely unaffected financially.”

“The country was very united during the pandemic. The economic crisis that is coming could be very divisive,” he said.

Noting that he would be responsible for job creation as the Minister for Enterprise, Trade and Business, Mr Varadkar said that Ireland, along with Luxembourg, was one of the countries that supported the EU-wide coronavirus recovery fund. But he said that most of the action that will be taken by European countries to restore their economies will be domestic.

“We had a budget surplus for the last two years, but this year we’ll have a deficit in the region of 10 per cent of our GDP. We had to do that, to put in a social safety net, so people don’t fall into poverty, and now to get our businesses open again and growing again — but the fear is always there of a second wave that could set us back.”

“The worry now is international travel. Even though we’re part of the European Union… we’re also an island, we’re not part of the Schengen area for example,and we have border controls at our ports and airports. We’re a little bit concerned about restoring international travel. We’re a connected country, we want people to be able to travel again for business and holidays, but one real risk for us.. is that the virus could come back into the country from America, Britain, France other places where it isn’t under control the way it is here.”

Along with the two other prime ministers, Mr Varadkar addressed his experience as a gay politician in the event that marked Pride month.

“Ireland had been modernising… long before I was prime minister,” he said. “In some ways I am a product of a society that had become more liberal.”

Noting that he came out as gay during the marriage equality vote, he said that the media in Ireland is “quite respectful of people’s privacy.”

He added: “I do think there is a sadness in Ireland that we don’t really have American leadership any more,” he said, noting that America had been traditionally regarded as “a force for good in the world, a country you look up to.”

With regards to LGBT issues, he noted that the gay rights movement began with the Stonewall protests of the late 1960s in the United States.

“There was a time when America was ahead of the world on so many issues,” he said. “Perhaps that will change in November and America will be back.”