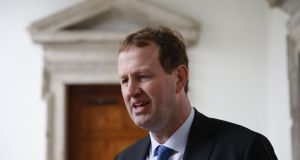 Fianna Fáil’s Jim O’Callaghan turned down a junior ministry and his statement is seen as an indication he intends to cultivate the party grassroots ahead of a potential future leadership bid. Photograph: Nick Bradshaw

The junior ministerial appointments were the last chance Micheál Martin, Leo Varadkar and, to a lesser extent, Eamon Ryan, had to calm the anger among TDs who were passed over for Cabinet preferment.

Martin, the Taoiseach and Fianna Fáil leader, had the hardest task of the three following the unrest among his party TDs over the weekend.

Martin largely succeeded in squaring off as many potential long-term difficulties for himself as possible in his Minister of State appointments, barring a handful of disappointed TDs.

The regional imbalance at Cabinet was also rectified with a number of appointments from constituencies along the west coast by both Martin and Varadkar.

For Martin, the Jim O’Callaghan question overshadowed the initial Cabinet appointments and, as it transpired, the junior ministerial picks too. Martin left the high-profile justice spokesman out of his seven choices for the Cabinet table but on Wednesday offered him a junior position in the Department of Justice, under Minister Helen McEntee, with responsibility for law reform. His offer was refused but it is possible Martin may have suspected this would happen, given rumours in recent days that O’Callaghan would decline a junior position.

Although the offer has denied O’Callaghan political martyrdom, the Dublin Bay South’s refusal is still a harbinger of potential trouble for Martin. And the angry reaction of former Fianna Fáil chief whip Michael Moynihan showed that there will be some in the parliamentary party who will be inclined to cause trouble for their leader.

Cork North West’s Moynihan, who was a Martin loyalist, lost out and said his leader “insulted me and my community” after nine years’ work to help rebuild Fianna Fáil.

O’Callaghan said he wants to “devote more time to strengthening our great party by making it a more attractive option for young voters”.

“I also believe Fianna Fáil needs strong voices outside government who can ensure that our party’s identity can be protected during the term of this Coalition Government.”

O’Callaghan’s statement was widely interpreted as an indication that he intends to cultivate the Fianna Fáil grassroots ahead of a potential future leadership bid, and the level of his activity among rank and file members will be keenly watched in the months ahead.

Yet other Fianna Fáil big beasts who could have been dangerous outside the tent, such as Limerick’s Niall Collins, were brought in by Martin. Another prominent TD who was not appointed to Cabinet, Meath East’s Thomas Byrne, was given the plum position of Minister for European Affairs.

Despite the disappointments and resentments of recent days, Martin’s position at the helm of his party is secure, at least until he hands the Taoiseach’s office over to Varadkar in December 2022.

But all of Martin’s moves in recent days give the impression that he does not expect to lead his party for much longer after that. Too many enemies are being made for there to be a clamour for him to lead Fianna Fáil into the next election.

Varadkar’s job was easier, since the generational change he was seeking with Fine Gael prepared the ground for those who lost Cabinet posts – Charlie Flanagan, Michael Creed and Michael Ring – to be moved to the backbenches.

Josepha Madigan, who has also left Cabinet, was given a junior ministry and former minister for housing Eoghan Murphy let it be known that he did not want any ministry at all.

There was surprise at the decisions of Joe McHugh to refuse a junior ministry, as well as that of John Paul Phelan to decline the position of deputy government whip.

For Eamon Ryan of the Greens, the task was much easier since the overwhelming majority of his TDs are first timers. Ryan gave jobs to Ossian Smyth, Joe O’Brien and Malcolm Noonan.

Dublin Central’s Neasa Hourigan, one of only two female Green TDs, is likely to have lost out because of her opposition to the programme for government.