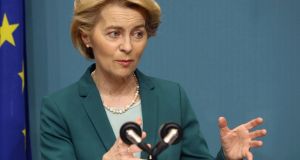 A hard border in Ireland will “never, ever” come back as a result of Brexit, the new president of the European Commission has said.

Ursula von der Leyen said the protocol on Northern Ireland that forms part of the UK’s EU withdrawal agreement “makes sure that a hard border will never, ever come back again”.

“Neither physically nor mentally,” she said. “We now expect the withdrawal protocol to be implemented in full and we will invest in ensuring that.”

Ms von der Leyen said Ireland’s national sovereignty had been not only defended but magnified by the EU in the Brexit debate.

“We have shown that for us, for Europeans, all member states are equal,” she said, adding that they stand together when the vital interests of one are threatened.

Ms von der Leyen said the UK’s decision to leave the EU must be respected but the truth was that the partnership between the two could not be as close as it had been before.

“Today Ireland is a strong and confident country, with the fastest growing economy in the EU and more people at work than ever before...And all this in spite of the spectre of Brexit.”

She said this was first and foremost down to the Irish people’s tenacious spirit but it was also due to Ireland’s “strong European choice” and its place at the core of the EU.

She praised how Ireland “opened your door” during the refugee crisis and showed that hospitality was “sacred for the Irish”.

On climate change, she said Ireland’s ambitious plan was fully in line with the EU’s objectives. Responding to climate change was not only a challenge but also created opportunities, she added.

Mr Varadkar said Ireland would always be grateful for the solidarity shown by the EU institutions and fellow member states over the past few years.

He said past generations instinctively knew why European unity was a good idea as it brought peace and helped defeat communism.

“But for younger people today the horrors of world war, and the evils of facism and communism, are not in their memory and for them Europe needs a new project, a new raison d’etre.”

Earlier, Ms von der Leyen told a at a press conference at Government Buildings that a deal on Brexit would not have been possible without the “hard work” and “patience” of the Government. She paid tribute to Mr Varadkar’s leadership on the issue.

Mr Varadkar said that the next step in the Brexit process was to negotiate a free trade deal between the UK and the EU. He said there must be a “level playing field so that the single market and the customs union are not diluted. And we must have common minimum standards so that the UK doesn’t attempt in any way to undercut the EU when it comes to labour standards, environmental standards, health and safety product standards.”

He said that after speaking to Boris Johnson recently, he believes the British prime minister “understands that, and is supportive of that as well”.

“Getting that agreement is crucial for businesses, for jobs for exporters, and also for the agriculture sector as well. Because whatever problems we face at the moment in our beef industry, they would be much worse if our beef farmers and our meat industry doesn’t have access to that British market in 2021.”