Martin to meet leaders in North for first time as Taoiseach 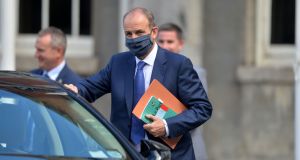 Micheál Martin is to make his first visit to Northern Ireland as Taoiseach later today.

He is to meet the First and Deputy First Ministers, Arlene Foster and Michelle O’Neill, and the leaders of the other parties in the Northern Executive.

Brexit and the coronavirus crisis are expected to be on the agenda, as well as the cross-Border relationship and institutions including the North-South Ministerial Council.

The visit comes a week later than originally planned, after Mr Martin was forced to postpone his trip North due to “scheduling difficulties”.

Senior sources in Belfast said the delay was down to a “cock-up rather than a conspiracy” and while there had been discussions around a potential visit last week, their understanding was that it had not been confirmed.

Mr Martin told The Irish Times he would take a “pragmatic” approach and seek to promote “practical” co-operation between North and South.

Speaking in a BBC interview, Mr Martin said political competition or rivalry in the Republic of Ireland would “not interfere with my approach as Taoiseach in terms of the implementation of the Good Friday Agreement and in terms of the working out of the various activities and initiatives that we would like to undertake together.”

Asked if his party’s relationship with the SDLP would undermine the Government’s role as an “honest broker” in northern politics, he said he would “continue that tradition of honest objective leadership in respect of the North”.

SDLP leader Colum Eastwood said while Mr Martin was no stranger to Northern Ireland it was important he visit as Taoiseach.

This was particularly vital, he said, given the threat posed by Covid-19. “It is important that the two governments on both parts of the island work together, given that coronavirus does not respect borders,” he said.