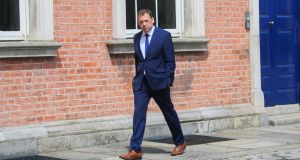 Labour leader Alan Kelly has called on the Minister for Agriculture Barry Cowen to clarify in the Dáil whether he ever drove without a licence.

Mr Cowen has been embroiled in a controversy after it emerged that he served a three-month disqualification after he was found to be driving under the influence of alcohol in September 2016.

The Fianna Fáil TD was stopped at a checkpoint and breathalysed on his way home to Offaly from Dublin after the All-Ireland football final.

He was found to be over the limit and was issued with a fixed-charge penalty notice, a €200 fine, and was disqualified from driving for three months.

Mr Kelly, speaking outside the Dáil on Tuesday, called on Mr Cowen to tell the Dáil whether he had ever driven without a licence at any stage. Mr Cowen is due to make a statement later tonight.

“Like some other deputies in this house I come from a rural constituency and you make sure you get your full licence very quickly,” Mr Kelly said.

“I think the issue now is he needs to give clarity in the Dáil today regarding his licensing situation. As I say he comes from a rural area like myself so I presume that he has been driving from a very young age. As long as he can demonstrate or show that he has always had a licence of some sort, that he has not been as a senior politician driving without a licence.”

He said this would be a “significant development”.

Mr Cowen has said that he previously drove unaccompanied while on the provisional driving licence.

The Laois-Offaly TD said he was “humiliated” and “embarrassed” by the incident but had to “accept the punishment that has been given”.

Mr Cowen said in hindsight he “maybe” should have told Fianna Fáil leader Micheál Martin at the time, about the disqualification.

“I wasn’t trying to keep it a secret, I was trying to get on with my job,” he added. “I acknowledged and appreciated the severity of what had happened. I in no way tried to remove myself from the implications and I took the medicine that was dished at the time.”