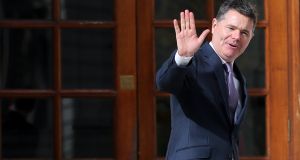 Minister for Finance Pascal Donohoe: ‘The next critical phase will be how the House of Commons responds back to this.’ File photograph: Niall Carson/PA Wire

Minister for Finance Paschal Donohoe has said that the agreement announced this morning by Brexit negotiator Michel Barnier delivers on Ireland’s objectives as regards Brexit. But he warned that “we must allow space for the House of Commons to form a view” on the agreement.

Speaking in Washington ahead of a meeting with British chancellor Sajid Javid later today, Mr Donohoe struck a note of caution as he welcomed news of the agreement, emphasising that “we’ve been here before.”

However, he said that the recent budget, including the 1.2 billion contingency Brexit package he announced this month, would still stand.

“All the budget day decisions still stand. We have in place up to 1.2 billion of contingency funding that is in place to support our economy if we have to deal with the consequences of a no deal.”

However, he warned: “It’s important to recognise that we have been at this place before . . . the next critical phase will be how the House of Commons responds back to this. It’s only when that reaction has taken place and we can see if this agreement is going to be ratified by the House of Commons then we’ll be clear on where we stand.”

“It has still yet to be voted on let alone be ratified by the House of commons and for that reason the contingency funding and the budget framework that we have in place continues to be deeply relevant to what we might yet have to deal with.”

While giving a cautious welcome to news of the agreement, Mr Donohoe said that the deal reached today met Ireland’s objectives as regards Brexit.

“Throughout this process the Irish government laid out a number of critical priorities that we wanted to achieve on behalf of our island and on behalf of our country in relation to managing the outcome of Brexit. It was protecting the Good Friday Agreement, it was ensuring that our membership of the single market would not be changed and it is also ensuring no return to a hard border on the island of Ireland. The agreement that has been confirmed here today by Michel Barnier delivers against those objectives. I think it is important to emphasise though that we have been here before, there is much detail in the agreement now and we all need to reflect on what it means and critically now allow space for the House of Commons to form a view on this.”

Asked if the government should consider a snap election, Mr Donohoe reiterated the Taoiseach’s view that the likely election date is going to be before the summer next year. “My belief and expectation is that we will have a general election next year.”

Mr Donohoe said that he will be taking stock of the latest Brexit developments when he meets Mr Javid later today, on the fringes of the IMF-World Bank meetings in Washington. “We are going to review where things stand today and look at what are the opportunities now for our countries to work closely together even as we go on our different ways as regards to Europe. ”

Mr Donohoe said he will raise the issue of US tariffs imposed on Irish and other European goods that are due to enter into effect tomorrow during his meetings today in Washington.

Irish food products including Baileys and Kerrygold butter are impacted by the move which enters into effect this week. Irish cheese products will also be affected.

The US announced plans to impose the punitive tariffs on a range of product lines earlier this month after the WTO issued a judgment in a long-running trade dispute over what it says are unfair subsidies given to Airbus in Europe.

Most of the tariffs are applies to imports from France, Germany, Spain, and the United Kingdom – the countries who have been accused of subsidizing the aircraft industry.

However, exports from Italy and Ireland have also been targeted. Products as diverse as bed linen, wine and olive oil are included in the tariff plan announced by the US trade representative’s office.

A parallel case taken by the EU accusing the United States of illegally subsidizing aircraft maker Boeing is due to be resolved next spring, prompting hopes that some kind of compromise agreement can be made between the two blocs.