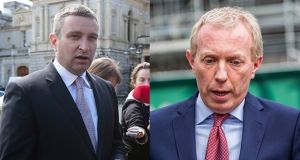 An investigation in the Dáil voting controversy has found it is not “legally appropriate” to recommend sanctions against a number of Fianna Fáil TDs because another inquiry into the issue is ongoing.

A report which examined the events of last week, when Fianna Fáil TD Niall Collins voted six times for party colleague Timmy Dooley while he was absent from the chamber, was published today.

Addressing the Dáil after the report’s publication, Ceann Comhairle Seán Ó Fearghail said the controversy over voting has “further eroded confidence in how our national parliament conducts its business”.

The report by Dáil clerk Peter Finnegan has not recommended sanctions because the committee does not want to prejudice the work of another committee which is also investigating the matter.

Mr Dooley has denied asking Mr Collins to vote for him when he was absent from the Dáil chamber saying: “No, I am clear on that fact.”

Mr Dooley told the investigation that he left the Dáil complex instead of returning to vote in last Thursday’s voting bloc.

Detailing what happened on the day, the report says: “Deputy Dooley approached Mr Collins, who was speaking with another colleague at the time.

“When asked about the nature of the conversation with Deputy Collins, Deputy Dooley said that he told Deputy Collins that he needed to speak with him.”

The report says Mr Dooley told Mr Collins: “I’ll see you at the vote but I have to make a call.”

“When asked what he meant by pointing at the seats, Deputy Dooley was indicating to Deputy Collins that he would see him when they were voting.”

Mr Dooley told the investigation that Mr Collins had assumed he was in the chamber and that is why he voted for him. Mr Dooley confirmed he had not taken any steps to correct the record.

Returned to his office

Mr Dooley confirmed to the inquiry that that he did not vote in any of the eight scheduled votes.

Mr Collins told the investigation he was not asked to vote for Mr Dooley.

“When asked what he believed Deputy Dooley meant by pointing, he said that he had no idea, that he was looking at Deputy Dooley’s face and not his hands. He further states that he did not see Deputy Dooley leave the chamber.”

Mr Collins said there was “no particular reason” why he then sat in the wrong seat. He said he “assumed” Mr Dooley was in the chamber.

The report found the Dáil committee on procedures and privileges (CPP) needs more powers to sanction politicians who vote for absent colleagues or colleagues who are away from their designated seat and should have a role in considering irregularities during votes.

The report also recommends that voting should not start until all members are in their seats. If an error comes to light it must be notified to the Ceann Comhairle.

Ceann Comhairle Seán Ó Fearghail told the Dáil that the report was “factual and evidence-based,” and though it didn’t make findings, the facts were “stark and unpalatable”.

He said there would be statements on the issue in the Dáil later and said it was his “sincere wish that members read the report before they express their views”.

This committee is scheduled to meet later today and has the power to recommend a motion to the Dáil on the matter. This could result in a potential expulsion of up to 30 days if the TDs are found to have breached ethics laws.

1 Dr Tony Holohan expected to return to his post next week
2 Covid-19 infections from funeral led to a third of restaurant’s staff self-isolating
3 Coronavirus: 442 new cases, 4 deaths as stricter house visitor limits recommended
4 How one couple’s weekend away resulted in 30 Covid-19 cases
5 Return to normal life, Russians were told – except for Vladimir Putin
Real news has value SUBSCRIBE