Hundreds of schools face closure on Tuesday due to teacher strike 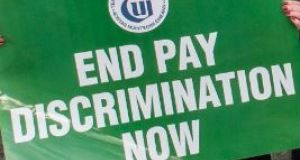 About 19,000 members of the TUI plan to hold a one-day stoppage on February 4th over the two-tier pay issue in schools.

A teachers’ strike over the issue of a two-tier pay system is set to go ahead on Tuesday and close hundreds of second level schools across the State.

Talks involving the public service agreement oversight group and the Teachers’ Union of Ireland (TUI) ended on Friday evening without a breakthrough.

However, it seems increasingly unlikely that financial penalties will be applied to the thousands of second level teachers who plan to go on strike just days ahead of the general election.

The one-day stoppage by about 19,000 TUI members, which will also affect institutes of technology and centres of further education, is aimed at making the lower pay scales for teachers hired since 2011 a central political issue.

In a statement after its meeting with the TUI, the oversight body - made up of representatives of public service management and unions, and chaired by the Workplace Relations Commission - said it regretted that the proposed strike would go ahead.

“The oversight body will meet in the near future to consider the issues raised by the parties in connection with this matter.”

The Government has powers under financial emergency legislation to impose sanctions on members of trade unions considered to have “repudiated” the public service agreement.

However, a spokeswoman for Minister for Public Expenditure Paschal Donohoe said it was “not constructive” to talk about financial penalties being applied to those teachers taking part in the planned strike.

The latest figures indicate the strike is set to close just around half of the State’s 700-secondary schools, and cause significant disruption in further education centres and institutes of technology.

The Department of Education said it was likely that virtually all of the 248 Education and Training Board schools and 96 community and comprehensive schools would be closed to students. In addition, it is understood that upwards of 40 of the country’s 380 voluntary secondary schools will also be affected.

While this latter category of school is mostly represented by Association of Secondary Teachers Ireland (ASTI) members, the union has directed its members not to provide cover for striking TUI colleagues. This has forced the closure of some voluntary secondary schools on health and safety grounds, even in cases where a relatively small number of teachers are TUI members.

Many schools, as a result of the proposed strike, have re-scheduled mock exams for Junior and Leaving Cert students, while the timings of some assessments for students sitting the Leaving Cert Applied have also been shifted.

The Government in 2016 imposed financial penalties on members of the ASTI after they were considered to have “repudiated” the public service agreement by taking industrial action. Members of the union lost out on about €15 million in increments and other benefits as a result. However, similar sanctions were not imposed on members of the Irish Nurses and Midwives Organisation (INMO) following their strike last year.