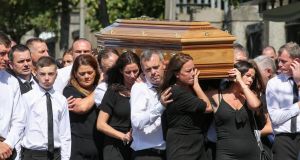 John Hutch’s coffin is carried to the Church of the Holy Family on Aughrim Street, Dublin. A brother of Gerry ‘the Monk’ Hutch, John Hutch died after an accident in his Stoneybatter home. Photograph: Crispin Rodwell

The funeral of John Hutch, brother of veteran criminal Gerry Hutch, was told “the last week has been a traumatic week and the end of a traumatic time” for his family.

The funeral passed off peacefully on Tuesday morning amid a large Garda security operation at the Church of the Holy Family on Aughrim Street, Dublin.

Funeral celebrant Fr Paddy Madden told mourners that Mr Hutch was a “provider and protector” to his family but his “capacity to provide was severely restricted by totally unwarranted and wholly unjustified threats to his life and an attempted assassination literally in his own backyard”, he said.

“I’m particularly struck by Johnny’s own resilience and steadfastness, particularly shown after the deaths of his son Gareth and brother Eddie within the space of a few months a few years ago.”

John Hutch (66) fell down the stairs at his home off North Circular Road, Dublin 7, last Tuesday. Armed gardaí, who were stationed nearby, came to the scene and administered CPR before taking Mr Hutch to hospital. He died on Thursday as a result of massive head injuries.

Mr Hutch was not involved in crime but has been the subject of at least one assassination attempt in recent years relating to the Hutch-Kinahan feud which claimed the life of his son Gareth in 2016. He also lost a brother and two nephews to the violence.

“Coping with these losses required superhuman effort as it does for all the family. Johnny carried his grief silently and sadly, and I’m sure he was utterly bewildered – for him it was deeply personal,” Fr Madden said.

Gerry Hutch, who is considered the head of the Hutch crime organisation, was not thought to have returned to Ireland for the funeral in the church around the corner from John Hutch’s home.

Gerry Hutch is still considered a prime target for the Kinahan criminal gang. He is also wanted for questioning by gardaí in relation to the Regency Hotel shooting which kicked off the most intensive period of a feud that has to date claimed 18 lives. Several other gangland figures closely associated with the Hutch family also appeared to stay away from the church service.

Two of the chief mourners were men not involved in organised crime but who nonetheless have been repeatedly targeted by the Kinahan gang.

Gardaí believe John Hutch’s son Jonathan was the intended target of gunmen at a Majorcan holiday resort in 2016 who instead mistakenly murdered father-of-three Trevor O’Neill.

Jonathan Hutch carried his father’s coffin alongside his uncle Patsy Hutch. Last year three heavily armed men believed to have been recruited by the Kinahan gang were arrested just 250m from Patsy Hutch’s house in the north inner city.

John Hutch spent the final years of his life mourning the murders of the family members and fearing for his own life. He gave up his job as a taxi driver due to the feud and rarely left his fortified house, where he lived with his wife, Vera.

In May 2016, Mr Hutch’s son Gareth was shot dead on North Cumberland Street. Mr Hutch never recovered from his son’s murder and was himself a target four months later when two gunmen fired six shots at him as he stood outside his home.

Gardaí searched the church for explosives and firearms before the funeral service and maintained a visible but low-key presence throughout. Members of the armed support unit, submachine guns in hand, were stationed at either end of Aughrim Street while uniformed officers stood guard around the church and plainclothes members mingled with the crowd.

The Garda had received no intelligence warning of a specific threat but believe the Kinahan gang still has the capability and motivation to launch a fresh attack. Potential low-level violence and harassment from associates of the Kinahans was also a concern.

Following the funeral Mr Hutch was buried beside Gareth in Glasnevin Cemetery.