Lowry has no deal with Government – but has access to Ministers

Taoiseach says: ‘They are able to raise queries and issues on which we try to assist’ 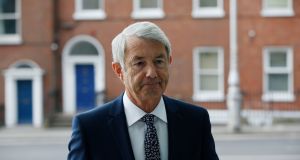 Michael Lowry has said the Taoiseach has sought his support and has instanced new investment for South Tipperary General Hospital in that context. Photograph: Collins Courts

The Taoiseach and Tánaiste have insisted that there is no agreement, formal or informal, between the Government and Michael Lowry in return for his support.

And so the fact that Lowry has supported the Government on 89 occasions in the Dáil – and voted against it only 10 times – suggests an amazing confluence of views and ideology. A former Fine Gael TD after all, he must really like the cut of Leo Varadkar’s jib.

There is evidence the relationship between the Government and a small group of Independent TDs who offer support from time to time is a little more complex than nothing, which officially there is.

The office of the Government Chief Whip – whose job it is to maximise Government support – says its only dealings with Lowry are through his membership of the Rural Independents Group. The whip of the seven-strong group, Mattie McGrath, said it has no understanding with the Government over anything.

But on an informal basis, the situation is different. There may be no agreement, written or oral, but “understandings” are struck from time to time.

For instance, The Irish Times understands that Noel Grealish and Michael Healy Rae have agreed to act as a “pair” on occasion for Ministers who are away on official business in order to shore up support for votes.

With Independents like Lowry and Seán Canney who provide more consistent support in the Dáil, there is a quid pro quo, and that translates into access to Ministers.

The Taoiseach admitted as much in the Dáil recently. “They do of course have access to the Government in the same way all Independent deputies who support the Government do. That means they are able to raise queries and issues, often relating to their constituency, on which we try to assist.”

The Government does not describe this as a deal, saying nothing has been offered to Lowry, but the Opposition do. Varadkar and Fianna Fáil leader Micheál Martin have had disputes about this, and Martin yesterday again claimed there was an understanding between Lowry and the Government.

Lowry has said the Taoiseach has sought his support and has instanced new investment for South Tipperary General Hospital in that context. He described the relationship as an understanding.

Now following this week’s conviction and fines on tax offences, there have been fresh questions about the exact status of the “access” that Lowry gets to Government and to Ministers. Varadkar again played it down.

“There is nothing to publish and nothing to hide”, said Varadkar. “We have no formal agreement, written or verbal, with any Independent TD.”