Brexit debate an assault on values of democracy – Chris Patten 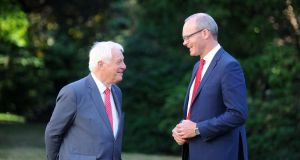 The debate over Brexit has started to turn into an assault on the institutions and values that have made liberal democracy work, the former Tory minister, EU Commissioner and Governor of Hong Kong, Chris Patten has said.

In a speech delivered in Dublin on Wednesday he cited an independent judiciary, the notion of parliamentary democracy as envisioned by Edmund Burke, autonomous universities, tolerance, and resistance to majoritarianism as among those institutions and values that are under attack.

The international order in the wake of the second World War chose on the whole to turn its back on the “Hobbesian view of might and right”, or the view that, in international affairs, “the strong do what they can, the weak suffer what they must”.

Lord Patten, who served as a junior minister in Northern Ireland and as chairman of the Policing Commission that led to the PSNI, said he hoped that such a Hobbesian vision did not become one of the long-term consequences of Brexit.

A “nationalist rage” is getting the UK into a “terrible mess” in an effort to control trade policy and take back control from the EU.

But the UK will end up taking the rules that determine commerce from somebody else, such as the US or China.

“It has invariably been true that if you are not at the table, you are on the menu,” he said in an Iveagh House lecture called Ireland, Britain and the Challenge of Nationalism.

He said that contrary to what was claimed by some commentators, what has “eroded liberal democracy” in recent years is not an assault on identity by the elite, but a series of policy failures some of which have been caused by forgetting that many of the problems facing national communities can only be dealt with through international cooperation.

Ideologically driven deregulation in the US, economic inequality, a failure to match growing global trade with more investment in retraining those who lost their jobs to those on lower pay in other continents, were cited by Lord Patten as being among the policy failures that “cracked the foundations of liberal democracies”.

He said the greatest challenges he had faced during his political career were “stoked by the politics of identity”, not least during his time in Northern Ireland.

However, the success that is the Belfast Agreement was at risk as a result of a resurgence of nationalism in England and elsewhere.

“It is strange that as Ireland has become more pluralist, more extrovert, more committed to individual liberty and human rights as a constructive member of the European Union, Britain has become less comfortable and has felt less at home as a member of the Union to which it has belonged pretty much on its own terms.”

The rise of nationalism in Europe and America should cause people anxiety, given what has happened in history.

While there was plenty to criticise in the EU, in a world threatened by “Vladimir Putin’s murderous and mendacious kleptocracy”, a global economy that mercantilist Leninist China wants to dominate, and at a time when US leadership is “in dubious hands when visible at all”, the UK needs to work closely with its neighbours in order to look after its own interests. “But this argument has not been heard very often at Westminster.”