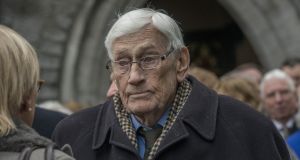 The capacity for violence remained “very near to the surface” in Northern Ireland and politicians must “take their time” in any discussions around future governance, former Northern Ireland deputy first minister Seamus Mallon has warned. Photograph: Brenda Fitzsimons/THE IRISH TIMES

Former Northern Ireland deputy first minister Seamus Mallon has warned that holding a border poll based on the premise of securing a 50 per cent plus one vote for unity would be “a recipe for disaster” in the North.

The capacity for violence remained “very near to the surface” in Northern Ireland and that politicians must “take their time” in any discussions around future governance, Mr Mallon said.

Speaking following his address at the Glencree Centre for Peace & Reconciliation on Saturday, he called for an urgent and concerted effort to rebuild hope in the peace process saying it was “time for Northern Ireland leaders to lead”.

Mr Mallon said he did not foresee the restoration of the Stormont power-sharing Executive and Assembly “this side of Brexit” and accused the two major political parties of lacking the necessary courage to come to an agreement in re-establishing the Northern Ireland Executive.

“Neither of the two parties want to involve themselves in the complexities of Brexit and that is one of the reasons there is no government in place in Northern Ireland. Instead they have sneaked off and hovered about while trying to pretend that their ambitions are valid and good.”

The former deputy leader of the SDLP said the actions of the two leading parties had turned young people and adults in Northern Ireland off politics because they could see the way in which the two groups “are simply trying to destroy the Good Friday Agreement from within”.

Reflecting on the efforts he and former Ulster Unionist leader David Trimble had made in establishing the power-sharing executive under the terms of the Belfast Agreement, he said they succeeded in finding a means of governing during far more difficult times.

“We had the Drumcree problem in Portadown, the murder of the three lads in Ballymoney and we were trying to get a resolution in policing. The heavy lifting has been done. The benefits of an executive locally in an administration are huge but those benefits aren’t being passed on to the people of Northern Ireland. I think peace will continue but the capacity for violence is very near the surface at all times,” he added.

Journalist Eamonn Mallie, who also spoke at Saturday’s ‘Rebuilding Hope’ event in Glencree, warned “a diminished media force in print, broadcast and online servicing the Republic of Ireland from Northern Ireland” meant people in the Republic were “not being adequately informed of the nuances and changes taking place subtly on the ground in NI.”

Naoimh McNamee, head of the Glencree centre, said the ongoing Stormont impasse and the effects of the Brexit vote had heightened the “urgent need for spaces where people can explore the complex ways in which future generations on the island of Ireland can live, work, play, trade, and socialise together as we all realise the full peace dividend on our island”.