Asylum seekers nine months in Ireland will be allowed to work

But new scheme excludes those who are appealing rejected asylum applications 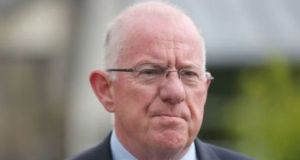 Asylum seekers must be in the country for nine months and be without a ‘first instance recommendation’ on their refugee status to be eligible to work, under new plans announced by the Government on Wednesday.

Minister for Justice Charlie Flanagan lifted the ban on asylum seekers gaining employment and waived the significant fees that had been enforced under the previous scheme.

However, a number of restrictions remain including a requirement to be here for nine months or more and without a first instance recommendation on their refugee status.

This will mean many asylum seekers who are appealing a decision made to reject their international protection application , ie refugee status, will not be eligible under the new system.

The directive, which will come into the force this weekend, will mean asylum seekers will be required to make an application to the Department of Justice to seek permission to enter the labour market.

There will be no fee but asylum seekers will have to renew the application every six months to ensure they remain eligible.

Mr Flanagan said he did not envisage offering employers incentives to recruit asylum seekers, while Minister of State at the Department of Justice David Staunton said businesses were ahead of the politicians on this issue and were eager to open their doors to asylum seekers.

There will be no restrictions on the type of employment offered to qualifying applicants with the exception of the civil and public service, An Garda Síochána, the Defence Forces and embassies accredited to the State.

If a person is granted permission to access the labour market and has been working for over 12 weeks, their direct provision allowance of €21.60 will be reduced or withdrawn. The payment to minors will not be affected.

There will also be a requirement on those in employment to make a contribution towards their direct provision accommodation.

Access to social welfare payments will also be permitted to those who find employment “subject to satisfying the qualifying conditions”.

The directive is a significant improvement on the previous scheme outlined by the Government. It required asylum seekers to secure a job that pays a starting salary of at least €30,000 per year, and may not work in any of 60 different sectors, including in hospitality, food, healthcare, social work, childcare, marketing, administration, textiles, printing, housekeeping and construction.

Mr Ó Laoghaire said he was disappointed at the fact that a person will have to wait nine months before an application can be made.

“I am disappointed also that it appears that those who have already received a negative first instance decision from the International Protection Office will be excluded regardless of how long they have been here.

“The International Protection Appeals Tribunal can involve significant delays, so this means that some of the longest here will be excluded.

“That is regrettable, and we will be seeking that the Minister addresses this, and acknowledges the fact that many long term residents will not be eligible under this element,” Mr Ó Laoghaire added.

The Minister for Justice said these measures are a further step on the road to significantly reform our protection process.

Mr Flanagan said: “Effective access to the labour market will help to alleviate social and economic exclusion for applicants and avoid long-term dependency on the State.”