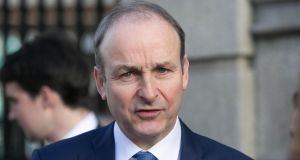 “Michael D has performed the role of President with great distinction. He has his finger on the pulse and has reached out to young people,” said Mr Martin.

Mr Martin was particularly complimentary of the President’s handling of the 1916 commemorations. “He captured the mood and ethos of how we should commemorate events like that,” he said.

There was no compelling reason not to support and endorse the President if he decides to run again, he told RTÉ’s Today with Sean O’Rourke show.

He pointed out that 1966 was the last time an incumbent president was challenged.

Others are entitled to enter the presidential race if they wish. “If others want to pursue it, it is up to them,” said the Fianna Fáil leader. “We are entitled to support a candidate. It has nothing to do with the confidence and supply agreement. I haven’t spoken to Fine Gael or Michael D.”

Mr Martin said Fianna Fáil Senator Mark Daly, who had been tipped as a potential presidential candidate, had not approached him.

Mr Martin also dismissed the issue of the President’s age, saying age was relative. “People who are 80 can be very vigorous,” he said.

Meanwhile, Independent Senator Pádraig O’Céidigh, who had indicated his interest in contesting the presidency, says he was surprised by Tuesday’s announcement by Mr Martin.

That decision will make it very difficult for him to go ahead with his plan to run, he said, as Fianna Fáil and Fine Gael dominate the majority of county councils.

“I’m not going to go for the sake of going,” he told the programme. “It looks very much like Michael D will return. It is very difficult for an independent candidate to get nominated.

Not having an election would mean 14 years before people could exercise their franchise.

“I need to totally assess clinically the chance of success,” he said. “I won’t do it unless I have a serious opportunity. I believe there should be a contest.”