File of 800-pages on €1.6bn disposal of NI loans understood to have come from developer 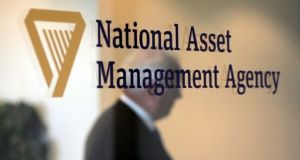 The Oireachtas Public Accounts Committee has been given an 800-page dossier containing a number of serious allegations about Nama’s sale of Project Eagle.

The correspondence was sent to members of the committee earlier this week but was given to the Oireachtas legal team for consideration. TDs were given a

It is understood the information was compiled by a developer based in Northern Ireland, who had previous dealings with Nama.

The person makes a number of claims against a number of officials in the agency, politicians and the police force.

Project Eagle is the name given to the National Asset Management Agency’s Northern Ireland property-loans portfiolio, which it sold in April 2014 to Cerberus, a US company, for about €1.6 billion.

The Pac has conducted an investigation into the sale and concluded Nama’s sale strategy was flawed.

A commission of investigation has been established into the transaction but it has been delayed due to a failure to hand over certain documentation regarding the sale in Northern Ireland.

The commission of inquiry, led by former High Court judge John Cooke, said Nama was co-operating with its investigation but that its method of collecting documents had omitted relevant material.

The commission said it had received 34,000 documents relating to the €1.6 billion loan deal in two separate tranches in February and March this year.

It is understood the documentation sent to the committee has also been forwarded to Mr Justice Cooke.