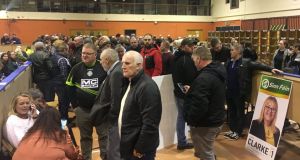 Sorca Clarke’s supporters awaiting the result of the first count for Longford-Westmeath in Athlone earlier this evening. Photograph: Colm Keena

The stand-out feature of the election in Longford-Westmeath was the vote for Sinn Fein candidate Sorca Clarke.

The Mullingar-based mother-of-four who helps her husband Darren Caulfield run their security business, lost her seat on Westmeath council last year when she got just 511 votes.

However she topped the poll in the general election with a whopping 11,277 votes, well ahead of minister of state Kevin Boxer Moran, and sitting TDs Peter Burke of Fine Gael and Robert Troy of Fianna Fáil.

Moran was emotional when he visited the count centre in Athlone on Sunday, complaining about online abuse of members of his family, and also at one stage saying that while he had never let the people of Athlone down, he felt they had let him down.

At that point he was not conceding defeat, but he was accepting that it would require a “miracle” if he was to retain his seat.

As Monday progressed some of his supporters began to believe that perhaps there would be a miracle, as the transfers to him came to him in greater numbers than had been expected. The four-seater constituency had fifteen candidates, and the counts passed slowly.

Robert Troy of Fianna Fáil always looked like retaining his seat, as did Fine Gael’s Peter Burke. But the early tallies had shown that a lot of Longford voters were as interested in having a representative from their county in the next Dáil, as they were in supporting their preferred party.

So even though after count nine Moran was in third place, and just under 1,000 votes ahead of Longford-based FF candidate Joe Flaherty, he ended up losing his seat.

That saw Flaherty move to second place. He was elected without reaching the quota, followed by Peter Burke, and Robert Troy. Final result: 1 SF; 2 FF; and 1 FG.