Local councillors to get increases in pay and allowances

Simon Coveney says new process will be vouched system, in line with Oireachtas 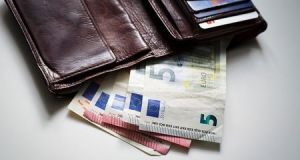 Councillors are to receive a pay increase and an increase in their annual allowances. File photograph: Getty Images

Councillors could receive up to €3,500 a year in additional allowances from May.

Minister for Housing Simon Coveney has confirmed all local authority members will receive an increase in the fixed allowance used to cover expenses incurred when on duty which will amount to up to about €2,500.

It is unvouched at present, but Mr Coveney said the new allowance would be a vouched system to bring them in line with Oireachtas members.

Separately a new allowance of €1,000 will be given to elected members of authorities which have municipal districts, which were created when town councils were abolished.

Councillors in all areas except in local authorities in Cork, Galway and the four in Dublin will be in a position to avail of this new payment.

A spokeswoman for Mr Coveney said the new allowance reflected the additional work carried out by elected members since reforms were introduced to local government in 2014.

The Local Authority Members Association (LAMA) welcomed the changes outlined by the Minister.

In a letter to members Cllr Bobby O’Connell, the association’s general secretary, said this was necessary to reflect some of the additional expenses incurred by councillors.

Mr O’Connell added: “LAMA has been promoting and requesting proper financial recognition of the true costs of being a councillor, in terms of workload, expenses and the amount of time that is spent in carrying out that work.”

Mr Coveney had moved to make these changes last year but the plan was withdrawn after concerns were raised by the Minister for Public Expenditure and Reform Paschal Donohoe.

However, it is understood he has since received Government approval to push forward with the changes from May.

Minister for Social Protection Leo Varadkar has already introduced legislative changes which allow councillors to access a range of social welfare benefits, including the State pension and maternity benefits.

Mr Varadkar introduced an amendment to the Social Welfare Bill at Committee Stage which would address the anomaly where councillors pay PRSI but get no access to benefits. The move allowed public representatives to secure the same entitlements as self-employed people. This included access to the State pension, widows’ pension, maternity benefit and paternity benefit, as well as the invalidity pension. There was also an extension of treatment benefit for dental, optical and hearing care.

It was seen as a move to garner support ahead of a leadership contest within Fine Gael.