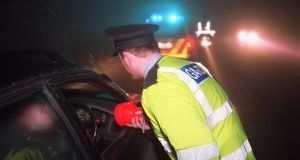 New figures show that between December 1st and January 8th, a total of 961 people were detained on suspicion of drink-driving. Photograph: Frank Miller

Almost 1,000 motorists were arrested on suspicion of drink-driving during the Christmas and the new year period, a significant increase on the previous year.

Figures released by Tánaiste and Minister for Justice Frances Fitzgerald show that between December 1st and January 8th, a total of 961 people were detained on suspicion of drink-driving.

Statistics for the previous December show a total of 576 people were detained on suspicion of being intoxicated while driving.

A breakdown of the drink-driving statistics for the Christmas and new year period just gone show the largest numbers of drink-driving cases were recorded in the city regions. The highest numbers of arrests outside Dublin, Cork, Galway and Limerick were in counties Kildare and Tipperary, with 59 in both.

There were 48 arrests in the Cavan-Monaghan division, 37 in Meath, 35 in both Donegal and Waterford and 34 in Westmeath.

Replying to a parliamentary question from Fianna Fáil TD Niamh Smyth, Ms Fitzgerald said she was deeply conscious of the serious issue of road safety and mindful of the rise in road traffic fatalities last year, which increased by 15 per cent from 162 to 187.

Figures on the number of gardaí in the traffic corps, which enforce drink-driving and road traffic legislation, show the division’s man power has fallen from 804 officers in December 2013 to 674 at the end of last November.

Ms Fitzgerald said the Garda expects traffic corps membership to increase by 10 per cent this year.

Mr Broughan said enforcement was key to cutting road fatalities, especially in relation to speeding. He pointed to the increase in road fatalities last year and the rise in pedestrian deaths already in January, six to date.

The Dublin Bay North TD said the planned 10 per cent increase in the traffic corps was welcome but said “it is still significantly below what’s necessary for the enforcement of drink-driving legislation”.

Ms Fitzgerald pointed out that there had been no Garda recruitment for five years and it would take some time “some time before there are fully trained officers available”.