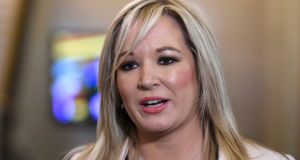 Sinn Féin finance minister Máirtín Ó Muilleoir has said he is planning a “no hiding place inquiry” into the “cash for ash” controversy which led to the resignation of his party colleague Martin McGuinness and the collapse of the North’s power-sharing executive.

The Northern Assembly is this week due to approve a proposal to hold an investigation into the Renewable Heat Incentive (RHI) scheme and to endorse a plan to claw back some of the £490 million (€567 million) projected losses from the scheme.

Mr McGuinness, whose decision to step down as deputy first minister over the controversy prompted fresh Assembly elections, is expected to be at Parliament Buildings in Stormont on Monday. He is to take part in a process, as he said last week, of handing on to a “new generation of republicans” the responsibility of leading Sinn Féin into the election campaign and the negotiations likely to follow.

Sinn Féin president Gerry Adams would not confirm the name of the new leader when speaking at the weekend but party sources said it will be Michelle O’Neill, the minister for health in the collapsed powersharing administration.

Ms O’Neill, a Tyrone woman who is MLA for Mid-Ulster, and the Newry and Armagh Assembly member Conor Murphy have for some time been viewed as Mr McGuinness’s most likely successors.

In recent weeks Ms O’Neill has been the more high-profile of the leading candidates. It fell to her to announce in the Assembly chamber last Monday that Sinn Féin would not be nominating anyone to replace Mr McGuinness as deputy first minister. She was also chosen to deliver the closing speech at a Sinn Féin conference on Irish unity in Dublin on Saturday.

Mr Adams and Dublin Central TD Mary Lou McDonald, viewed as a potential successor to the Sinn Féin president, are also due to be at Stormont for the announcement of the new effective leader of Sinn Féin in Northern Ireland.

It will be a busy week at Stormont before the Assembly is dissolved on Thursday. The DUP Minister for the Economy Simon Hamilton is to outline plans on how to significantly reduce the projected £490 million overspend in the “cash for ash” controversy.

While Mr Ó Muilleoir may express some reservations about his proposals in the chamber on Monday, it is expected that Mr Hamilton’s plans will be approved.

On Wednesday Mr Hamilton is scheduled to disclose some or all of the names of the farmers, hotels, care homes and other businesses who availed of the scheme – an initiative which saw participants receive £1.60 in subsidies for every £1 spent on their green energy heating systems. But against the threat of legal challenges it remained unclear on Sunday night whether all names will be disclosed.

Mr Ó Muilleoir on Monday is meeting the other Northern parties to discuss his proposals for a public inquiry into the scheme. He is due to formally announce details of the inquiry in the Assembly on Tuesday.

“This inquiry will be impartial and objective and it will be tasked with getting to the truth of this scandal,” he said.

“These meetings will provide an opportunity to discuss the terms of reference and hear the views of other parties. My objective remains to deliver a no-hiding-place inquiry that serves the public interest.”

At the weekend, former DUP health minister Jim Wells said his brother, two cousins and the husband of another cousin legitimately installed woodchip boilers at their chicken farms. “All of these farmers have been involved in poultry rearing for well over a decade and the wood pellet burners replaced existing heating systems,” he said.

“I have no financial interest whatsoever in any of these businesses, but I believe that was important that I make this information public as soon as I became aware of it.”

1 Quarantine process to be tightened as health officials grow nervous
2 US passengers fly into Dublin: ‘I’m here for six days. I guess I’ll have to stay inside’
3 Back with our old friends at eir – and nothing seems to have changed
4 ‘I thought it was a hoax’: Patient dies after Texas Covid party
5 White House turns its fire on Anthony Fauci over Covid-19 comments
Real news has value SUBSCRIBE