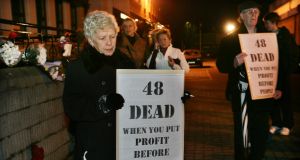 Christine Keegan and relatives of Stardust victims during a 25th anniversary vigil outside the former Artane club. Mrs Keegan lost daughters Mary and Martina in the fire

Talks aimed at resolving a developing Government row about a Dáil motion this week calling for a new inquiry into the Stardust fire are continuing between Fine Gael and the Independent Alliance.

Independent TD Tommy Broughan will introduce a Private Member’s Motion in the Dáil on Wednesday calling for a commission of investigation into the 1981 St Valentine’s Day tragedy at the Stardust ballroom in Artane, Dublin, in which 48 people died and 214 were injured.

Minister of State Finian McGrath will support the motion, and his Independent Alliance colleagues are likely to follow suit against the wishes of the Department of Justice.

Officially the department’s response is a single-line statement that the “Private Member’s Motion (is) being considered”.

However, Government sources say there is insufficient evidence for a new inquiry, and that substantive material has to be provided to allow for a commission of investigation, a stance that has enraged the families of the victims who have long campaigned for such an inquiry.

“I will be supporting the families in the Dáil regardless of what happens. My position is non-negotiable. It’s a very personal issue for me,” said Mr McGrath, whose constituency includes Artane.

He said “we need to get to the truth and get on with it, to put this to bed forever and let the families rest”.

Cause of the fire

This is the latest in a series of rows between the Coalition partners that have led to free votes against the protocol of collective Cabinet responsibility where the Government takes a single stance on issues. The Independent Alliance had a free vote on abortion and neutrality motions, and most recently on a motion on medicinal cannabis which Fine Gael opposed.

It is thought unlikely the Government will agree to a new commission, but Mr Broughan said a Dáil victory “is a pretty powerful thing” and would give the families confidence.

Mr Broughan’s call for a commission of investigation is backed by his technical group Independents4Change and by the AAA-PBP. Fianna Fáil has not decided on its approach to the motion, but it will be discussed by the party on Tuesday.

Weighed on the area

The families reject the findings of an inquiry chaired by former chief justice Ronan Keane. Mr Broughan said the Keane report was contradictory. “He says in the report that it’s not possible to establish the cause of the fire but in the conclusion says it was probably arson.”

Mr Broughan said there were resonances with the Saville inquiry into the Hillsborough stadium disaster, which overturned the findings of the first investigation into the deaths of 96 soccer fans.