Will Arlene Foster get her second chance? 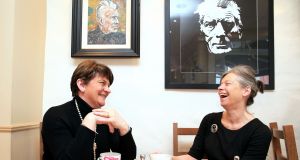 Writer Samuel Beckett’s alma mater, the all-boys Portora Royal School merged last June with the all-girl Enniskillen Collegiate Grammar School to form the Enniskillen Royal Grammar School. Soon, they will be united on a single site, backed by £23 million from the taxpayer.

Democratic Unionist Party leader Arlene Foster is a former pupil of the collegiate grammar school. Last week, she walked the grounds of the Portora site – which will be the home of the merged schools.

Business done, Foster declared: “Right, I am off to see my son’s maths teacher.”

Under pressure from a Stormont crisis that cost her the post of first minister, she attended parents’ evening at her son’s school, spending more than two hours talking to teachers.

There, she was relaxed, undisturbed by the wave of criticism that has threatened to engulf her at times as the “cash for ash” controversy rumbles on. She stopped every so often to talk to other parents.

However, when someone is the most talked about woman in Northern Ireland, flanked by protection officers and with an armoured ministerial car parked outside, it is difficult to be discreet.

“That’s the first time I have ever seen the press at a parents’ evening,” says one man. Soon afterwards, Foster was back in the car on the way to her East Bridge Street constituency office in Enniskillen.

While inside there was a tap at the window. The door opened and a woman wearing a woolly hat reached out to hold her hand. “I’ve never met you,” she said. “But I want you to know that I am thinking of you and I think it is terrible what they are doing to you and I am from the other side of the house.”

“Thank you, thank you,” replied Foster.

“I didn’t plant her,” she added, after an exchange that served as something of a counterbalance to the criticism she faces.

Born in 1970, the daughter of Johnny and Georgina Kelly, the former solicitor spent her early years at Dernawilt near Rosslea, one of three girls and a boy.

Her early childhood on a Border farm was idyllic, she recalls, remembering birthday parties in hayfields and playing in Rosslea Accordion Band. She attended the small primary school at Aughadrumsee, just across the Border from Clones, and has fought in Stormont for a future for small rural schools.

Disabled Enniskillen man Sean Muldoon believes in Foster: “There’s nobody more helpful than she is. I have pointed quite a few disabled people with special needs in [her] direction because Sinn Féin couldn’t be bothered. If she doesn’t come back as our MLA then Fermanagh is in trouble.”

However, another Enniskillen local, Caroline Wheeler, has a less favourable view. She says she asked Foster for help to get her disabled son winter heat allowance a year ago and is still waiting due to red tape. She thinks Foster could do more.

Another local, Scott Robinson, feels the DUP leader is being unfairly treated.

“They are just trying to hunt her down as usual,” he says. “I think she is doing very well for this part of the country. But I would like her to do a bit more for this area.”

Many believe she has mishandled matters in Stormont badly.

Journalist Chris Ryder tweeted last week: “Been saying for months Arlene Foster is just a minor country solicitor whose horizons were bounded by the Ballygawley roundabout.”

However, there is a real possibility that Foster is finished if she and her party take a hit in the Assembly election on March 2nd. If so, she may never need to pass that roundabout again.

Foster’s Fermanagh roots mean everything to her. She has travelled the world promoting her county, even presenting former US president Barack Obama with a special pen made from Fermanagh bog oak by Brendan Bannon.

But her greatest love is for her family; she is wife to Brian, mother to Sarah, George and Ben, who was born with pulmonary stenosis – a blocked valve in the heart – prompting Foster to get involved in the Heartbeat charity. She’s spoken in the past of how she was in tears as he was being operated on at three weeks old. Her biggest regret when her father died five years ago was she “didn’t get to say goodbye”. She received the news by telephone after touching down at Heathrow airport to attend a tourism event.

Her background as a child of the Troubles has been well documented. Her father, an RUC officer, survived an IRA bid to kill him when she was eight, as he went out late one evening to put cattle into a byre. He was shot in the head and lived with the wounds for 32 years.

“I remember them having to move after that – it was shocking,” says Foster’s childhood friend Jenny Ferguson. “They went to our church – it was a big thing, Johnny Kelly leaving home. It was an awful time for her. I think all of that shaped her.”

The family moved to Lisnaskea, but not away from the Troubles. The Provisional IRA detonated a bomb on a school bus being driven by a part-time UDR man bringing her and fellow pupils to the collegiate school.

Foster, who had an interest in history and debating, went on to Queen’s in Belfast to study law. “It hasn’t been an easy path for her given what happened in her own family to share power with people who in years gone by would not have been her friends,” says Ferguson.

Despite the image that has been formed of her, her friend Arlene is “not hard”, Ferguson insists. “She has to put on this tough exterior because she’s in a tough world. Her mum is a very strong lady and I think Arlene is the same.

“She’s a humble girl. I asked her one day, ‘what are you doing this evening?’ and she said she was ‘away home to do a bit of ironing’. That’s Arlene.”

Businessman Roy Kells agrees, saying she has come out of the cash-for-ash crisis “blameless. Her hands are clean. I remember talking to a few men at a meeting in Belfast about the young Arlene Kelly 25 years ago. They said if that girl continues the way she is going she will reach the top of the political tree.”

But Geraldine Maguire thinks differently: “Arlene’s credibility has been damaged. Unless everything is published, emails, documentations, we will not know the truth.”

Ruth Makhlouf, another friend, strongly defends her. “I get so angry when people call Arlene arrogant. They say that because she has such a strong personality, that she’s not afraid to back down. Has RHI damaged her? No. She is still our Arlene.”

“When we meet we talk about our children: school, homework, the first formals, friends, rugby, her wee boy and his chickens. She goes out in the morning with him to pick up the eggs. Her family comes before everything else.”

She was once spotted in a supermarket minutes after attending a ministerial engagement browsing the aisles for a Halloween costume for Ben. “When you are with her you forget she’s a politician, she’s a wife and a mother,” says Makhlouf. “She loves doting over her children and other people’s children,” says Makhouf.

Her personal tastes are simple. She is a Strictly Come Dancing fan, listens to the Backstreet Boys while in her office, enjoys playing badminton and swimming and loves fashion.

Regarded by her friends as loyal, Foster has left old alliances behind, especially when she quit the UUP, then led by David Trimble, over the Belfast Agreement. Her former comrades have not forgiven, or forgotten.

Another while a UUP member said: “I always viewed her as that person whose ambition got in the way of her common sense. Her lack of ability to listen to wiser counsel has stood in her way. She is someone who was so mad keen to make it to the top she simply was not prepared to graft in the middle.”

Lord Maginnis recalled one of her replies to a journalist during her UUP days, when she famously said: “Well, I am not here to make the tea.”

“There were other people who if they had to make tea would have made it and would have done it with a smile on their face,” he says.

Meanwhile, Denzil McDaniel, former editor of the Impartial Reporter newspaper, remembers occasional tensions. “She frequently rang me as editor to complain about a lack of balance in reporting her side of the argument.

“It was an uneasy relationship, but I have to say one which neither of us fell out about in a personal way.”

Her relationship with the Belfast-based press, McDaniel believes, improved after she became first minister, but quickly went backwards: “There is considerable mistrust, some of it deep-rooted from her earlier background.”

That background has imposed limits, he says: “We shouldn’t forget that Arlene was brought up in what was virtually a war zone in Fermanagh, which suffered more than many other areas. Violence over decades causes much mistrust and suspicion.

“The fact that Arlene Foster is still very grounded in her home county makes it difficult for her, I believe, in forging friendly relationships with Republicans.”

Sources say Foster plans to hit the road over the next month across Northern Ireland for the battle of her life, visiting every constituency several times.

She is expected to ask for a second chance. The question now is whether she will get one.