Irish Aid should have spotted signs ahead of Uganda fraud 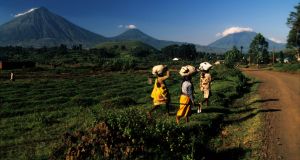 The report found that Irish Aid had made very important inroads into reducing poverty in Uganda. Photograph: Getty Images

The Government should have done more to spot the danger signs in the years leading up to a 2012 corruption scandal in which millions of euro in foreign donors funds were siphoned into the bank accounts of Ugandan officials, according to a report commissioned by the Department of Foreign Affairs.

The audit also found that Irish Aid’s programme in Uganda was too ambitious and did not respond well enough to changes on the ground.

Produced by Mokoro, a consultancy firm specialising in development, the report looked at Irish Aid’s programme in Uganda, one of Ireland’s key aid partners, in 2010-2014. In that period Irish Aid started out with annual expenditure of €32 million in the country, almost half of it channelled through the government in Kampala, the capital.

However, the discovery by Uganda’s auditor-general in 2012 that millions of euro in aid had been diverted to the private bank accounts of officials in the prime minister’s office prompted Ireland and other donors to suspend large parts of their aid programmes. Uganda refunded at least €4 million of Irish money that had been misappropriated.

The fraud led to sharp cuts in Irish Aid spending in the country, to €12.5 million in 2013 and €21 million in 2014, with more than two thirds of that money going through non-government channels.

Overall, the report found that Irish Aid had made very important inroads into reducing poverty and promoting asset creation, expanding access to social services and generating more awareness of gender and gender-based violence – all key aims of its programme. It found notables successes, in particular, in remote Karamoja, the country’s poorest region.

“However, it was overambitious, did not sufficiently respond to a changing environment, and was not sufficiently prioritised,” the report states. “Tighter choices” should have been made so as to intervene in fewer areas and to be “more cognisant of signs of broader change” in the political economy.

The report noted that the 2012 fraud was felt as a major breach of trust and was bound to trigger a strong reaction from Ireland and other donors. “However, better risk analysis and contingency planning might have allowed Irish Aid to send a very strong signal to the government at a lower cost in terms of collateral damage to the programme and to Irish Aid’s relationships with reformers within government,” the document states.

The audit suggests Dublin should have done more before 2012 to spot worrying signs. It states that the aid programme did not sufficiently take into account indications that the Uganda government was “moving in a direction of less transparency” in dealing with foreign donors, and “showing increasing signals that there was an overall weakening of Uganda’s governance structures”.

The report was completed in mid-2015 but only recently released by the Department of Foreign Affairs.

In its recommendations, the report suggests that the scope of the next Uganda programme should be “both strategic and modest” in what it takes on. Urging the department to focus on depth rather than breadth, it says durable impact could be achieved through sustained work in basic areas such as access to education, which, while “not always [as] politically interesting” as other areas, reflected Irish Aid strengths.

It also calls for a “more structured” risk assessment, which would help Irish Aid spot changes in local conditions and contain damage from future frauds or breaches.

Coronavirus: 326 more cases but no further deaths reported in the State 18:25
High rent costs driving rise in number of homeless single adults 17:47
Irish haulier to be sentenced in UK for drug smuggling, money laundering 17:42
Ruling due on examinership for south Dublin care facility 17:36
An Post confirms restart of full postal service to US, Australia, New Zealand 17:13