Five have taken part in final interviews for Garda commissioner

If an internal Garda candidate is chosen, appointment likely to go ahead in August 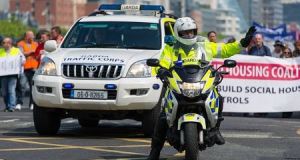 Five people have participated in the final round of interviews to become the next Garda commissioner. File photograph: iStockPhoto

Five individuals have participated in the final round of interviews to become the next Garda commissioner, The Irish Times understands.

Former commissioner Nóirín O’Sullivan stood aside last September after weeks of pressure on her position. Dónall Ó Cualáin is the Acting Commissioner.

Final interviews for the role are understood to have taken place over recent days and a decision may be taken as soon as within the next fortnight.

The Public Appointments Service will make a recommendation to the Policing Authority for consideration of Government, which will accept or reject the person for appointment.

The authority and Government were both represented on the interview panel by chair of the authority Josephine Feehily and a former secretary general at the Department of Justice.

If an internal Garda candidate wins the process, their appointment would likely go ahead in August. However, for an outside candidate, a security check would be required and possibly a work permit.

Those additional steps in the process would mean the next commissioner would be appointed next September at the earliest.

That would mean the commissioner would be appointed around the same time the Commission on the Future of Policing in Ireland reports to Government after a year-long review process.

The commission had previously warned that the new Garda commissioner should not begin until its work was concluded next September.

Deputy Chief Constable with the Police Service of Northern Ireland Drew Harris is understood to also be in the final five.

The Government agreed last December the new Garda commissioner would be paid a salary of €250,000 a year, compared to the €180,000 paid to Ms O’Sullivan.