State to build ‘rainy day fund’ of up to €8bn 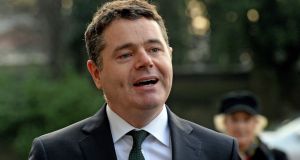 11/01/2018 NEWS.Paschal Donohoe, Minister for Public Exepnditure & Reform at the funeral Peter Sutherland at the Church of the Sacred Heart, Donnybrook.Photograph: Cyril Byrne / THE IRISH TIMES

The State will aim to set aside €8 billion in its new “rainy day fund” over the medium term to help shield its booming economy from any potential shocks in the future, the Minister for Finance Paschal Donohoe said on Wednesday.

The Government outlined plans for setting up the contingency reserve in 2016 and Mr Donohoe said last year he would initiate it with €1.5 billion from Republic’s sovereign wealth fund, the Ireland Strategic Investment Fund (ISIF), and add €500 million a year for the next three years.

Mr Donohoe will set aside the first €500 million as part of the 2019 Budget, which will be announced in October.

“The medium term plan is that we would get this fund up to approximately €8 billion,” Mr Donohoe told Newstalk after the Cabinet approved the establishment of the fund on Tuesday.

“We have many other needs that we have to meet each year but given how low the deficit is at the moment and given where our tax revenues are, I think it is appropriate to create an additional fund and an insurance policy for the kind of thing that we are not able to plan for at the moment.” – Reuters