Health implications should also be debated in other areas like pregnancy, says Sherlock 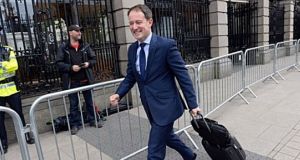 Labour TD Seán Sherlock has called for a debate on the kind of health warnings that should be displayed on alcohol products.

Mr Sherlock has introduced an amendment calling for the deletion of provisions that include warnings linking alcohol to cancer in advertising in the Public Health (Alcohol) Bill, which is passing through the Oireachtas.

This is despite his party colleague Senator Ged Nash strongly backing the provisions when the Bill passed through the Seanad.

Mr Sherlock told The Irish Times on Monday he was not against health labelling as such.

“But I think the health implications in other areas like suicide, heart disease and pregnancy, should also be considered,” he added.

Mr Sherlock said an initial proposal, that health warnings linking alcohol to fatal cancers should take up a minimum of one-third on the label on cans and bottles of alcohol, was excessive.

“This would involve huge expense for small companies involved in the alcohol industry,” he added.

The EU Commission has ruled, following complaints by alcohol manufacturers in several EU member states, that having warnings of that size was disproportionate and went beyond what was necessary to meet the Government’s health objective.

The Bill, which is the first of its kind to come before the Oireachtas, will be considered at committee stage in the Dáil on Wednesday week.

It introduces minimum unit pricing which ends below-cost selling of alcohol in supermarkets and other retail outlets.

It also bans alcohol advertising on public transport and bus and train stations, and within 200m of schools and playgrounds.

The Bill also bans alcohol advertising on television before the 9pm “watershed”. And adverts can only be shown in cinemas where films with an over-18 rating are being screened.

The Irish Cancer Society has accused Labour of a “stunning U-turn” on the issue.

Mr Sherlock conceded he was on a “solo-run’’ within the Labour party on the issue and that the stand he was taking would upset his colleagues.

“I just want the issue debated,” he added.