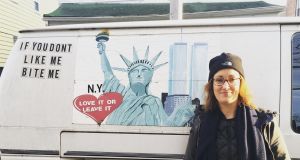 ‘This truly is the best America for millions of people. For the rest of us though, those of us resisting, persisting against this dark cloud, this is an ugly, shameful time.’

The week I was scheduled to emigrate to the US, an unpronounceable volcano erupted in Iceland. Flights were grounded across Northern Europe for almost a week and as the chaos built by the day, I felt an uncomfortable pressure growing inside me.

I had a love on the other side of an ocean and I was committed to making this massive life move but I couldn’t help thinking this wasn’t a good sign. Here was this volcanic interruption, erupting in another country, throwing all of my well-laid plans out the window.

I investigated travelling by sea but there was no boat for another month. Every day, I pored over reports about volcanic ash and wind directions and overnight, I and everyone in Ireland, was a world expert on aviation and atmospheric particles.

Leaving home isn’t easy. For some, their lives depend on it. For others, like me, it’s a privileged choice, freely made. But make no mistake, leaving the country you call home indents a tiny hole inside you that always feels empty.

My emigration story is a weird thing I can talk about at dinner parties. I’ll laugh as I tell it and quietly hold in the sad loneliness I feel when I think of home. I am lucky. I am privileged. I got to do it mostly on my terms and my decision to migrate was my own. Most immigrants to the US do not have it this good.

Before they even get to a US border port of entry, many immigrants will have risked their lives, suffered injury, abuse and degradation just to get there. If they make it past the border, threat and suffering continue. Think about it: if risking their life and putting themselves in danger to get into a country is better than the life they have come from, what have they come from?

The men in charge of managing this country don’t care about what suffering and danger people have endured. They care about reducing the number of brown and black immigrants and refugees. By hook or by crooked, cruel crook, they want them out or turned away when they get there.

Right now, millions, millions of humans are displaced because of war. There is an urgent human crisis happening. America’s response to this is to turn inwards, press play on the fear narrative and keep the country as white as possible.

Donald Trump and his ever-changing coterie of advisors are their ancestors’ worst nightmares: people who reject foreigners in search of a new home. Many of the men running this nation are descended from Irish immigrants, who came to the US to escape starvation, war and suffering.

This connection is lost on Mike Pence. It is lost on John Kelly. It’s lost on Paul Ryan. It’s lost on every single person working for this administration who forgets that they are the descendants of people who came from somewhere else. It’s lost on the voters who will put up an Irish flag this weekend, drink a bunch of cheap beers, tell everyone they’re Irish, and on their next breath, stand staunchly behind the hateful rhetoric that outsiders are bad.

Maybe the volcano was right. Maybe it was telling me something. A foreboding sign that darker times were coming. But for some, I know these are the best of times. Nazi sympathisers can march freely in the streets, brown immigrants are being deported, hate-crimes are rising, guns are becoming more prevalent, tax cuts are benefitting the rich, the environment is being destroyed to make more money, and guess what, women’s rights are under siege.

This truly is the best America for millions of people. For the rest of us though, those of us resisting, persisting against this dark cloud, this is an ugly, shameful time.

I’ll wear green on St Patrick’s Day because I am Irish and I know what that means. I’ll raise my daughter to love thy neighbour and respect all human beings. And for the rest of my time in my adopted home, I’ll remember how lucky I was to have the choice to come here, and how lucky I am to have the choice to leave. And I’ll think about the tiny part of me that never left home, that stayed and couldn’t leave, that waits for me, on the other side of an ocean.