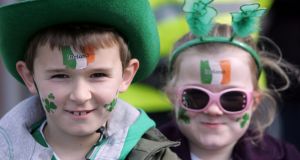 As patron saints go, Ireland got a good one: a very human figure who reminds us that identity and belonging are not simple things and that pride is most justified when it is rooted in humility. Photograph: Alan Betson

St Patrick, the old song says, was a gentleman. He was also, as we know from his own writings – the oldest surviving personal testimonies from Ireland – a former slave, a migrant, and a man keenly aware of his own failings and limitations: “My name is Patrick. I am a sinner, a simple country person, and the least of all believers. I am looked down upon by many.”

He was an outsider in Ireland and he was viewed with suspicion by his religious superiors in Rome. His famous Confession was written to defend himself against charges that he might not be entirely orthodox. So, as patron saints go, Ireland got a good one: a very human figure who reminds us that identity and belonging are not simple things and that pride is most justified when it is rooted in humility.

Contemporary Ireland has a great deal to be humble about. It has very recent and still raw experiences of the violence that Irish people of different persuasions can inflict on each other. It has even more recent experiences of national failure in the delusions that led to the great economic crash 10 years ago and, a decade on, it still struggles to provide access to some of the things necessary for human dignity, especially housing and healthcare.

But we don’t have to deny these failures in order to celebrate Irish pride. In the past, national pride may often have been a cover for suffering and shame. An exaggerated sense of Irishness was a temporary release from a reality of sectarian division, mass emigration and relative poverty. Paradoxically, the more a nation has to be proud of, the less need it has for over-the-top assertions of its glory. Ireland in general has reached a point where it can celebrate itself with humility and good humour and without that undercurrent of anxiety.

We know that Irishness is complicated and shifting, encompassing as it does different political and religious traditions and embracing both a wide diaspora and large immigrant communities. We know that there is still a very long way to go before those traditions are fully reconciled. We know that Brexit creates new uncertainties and challenges. We know that we have yet to create a nation in which everyone can share equally in the rights and duties of true belonging.

But we also know that the loose, contradictory, contested and imperfect thing we call the Irish nation is capable of creativity, courage, compassion and civility. We are, to borrow a term from W.B. Yeats, “no petty people”.

We have learned the hard way that Irishness has to be open, supple and generous if it is not to turn in on itself. For that reason, chauvinism, sectarianism and hatred of others have no part in it. In today’s world, that is something to be truly proud of.