Rescue 116: Timeline of a tragedy 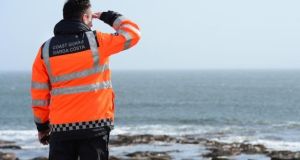 The Dublin-based Irish Coast Guard crew of Capt Dara Fitzpatrick, Capt Mark Duffy and winch crew Paul Ormsby and Ciarán Smith was tasked to provide “top cover” to the Sligo-based Rescue 118 helicopter on a medical evacuation mission off the west coast on the night of March 13th, 2017.

21.39, March 13th, 2017: Malin Head Coast Guard, Donegal, received a call from the skipper of a fishing vessel who had a crewman with an injured hand on board, 141 nautical miles west of Eagle island, Co Mayo. Sligo-based Rescue 118 helicopter tasked for medical evacuation after consultation at 21.55 between fishing vessel and contracted medical advisory service in Cork. Air Corps asked to provide “top cover” or communications support for Rescue 118.

21.54 Malin requests “top cover” for Rescue 118 from Dublin’s Marine Rescue Co-ordination Centre (MRCC), after Air Corps confirms it has no availability until 0800 hours the following morning. MRCC Dublin calls Irish Coast Guard Dublin base at 22.10 and it accepts the request.

22.03 Rescue 116 airborne from Dublin Airport. The helicopter initially routed towards Sligo, but after completing in-flight fuel and time calculations the crew opted for Blacksod lighthouse to refuel, and the commander selected a programmed “Blacksod South” approach route, which would include Blackrock lighthouse, 13 km to the west, as a “waypoint”.

The helicopter descended to 200ft radio altitude and was travelling at 80 knot when it reached Blackrock. Some 26 seconds prior to impact, a radio altimeter issued an “altitude” warning. The helicopter was close to an outcrop of two rocks, Carrickduff and Carrickad, 0.65 nautical miles west of Blackrock.

Some 13 seconds prior to impact, one of the winch crew identified an island on camera and warned the commander to “come right”. As the commander confirmed a 20 degree heading change, the crew interjected “come right now, come right, COME RIGHT”.

The AAIU preliminary report states “in the final seconds, the helicopter pitched up rapidly, impacted with terrain at the western end of Blackrock and departed from controlled flight”.

00.46, March 14th: The last radar return from R116 recorded by Shannon air traffic control. The first indication the helicopter was missing was at 1.06 hours when the helicopter didn’t answer radio calls to their call sign. At 1.08, Blackrock lighthouse advised they had no contact with helicopter.

April 1st: AAIU rules out mechanical fault as cause of crash.

July 23rd, 2017: Extensive search by Garda Water Unit and Irish Underwater Council search and recovery divers stood down after further dives in and around Blackrock island.