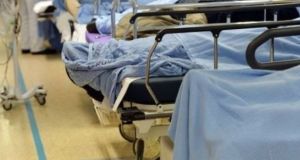 The Government is engaging in “spin” over the 1,500 new hospital beds announced in its winter plan, Labour party leader Alan claimed as he alleged that there are only 528 additional beds in the system.

He said “the Government is saying 1,500 new beds will be delivered as part of this winter plan, which is up until April, but when you add it all up it’s just 528 new beds”.

He asked Minister for Transport Eamon Ryan, who was taking leaders’ questions in the Dáil, “why are you saying there are 1,500 beds?”.

“We really need to know where the concentration will be on” because of the pressures in a number of acute hospitals.

The Tipperary TD pointed to the pressures on beds in hospitals and said that last Wednesday 80 people were on trolleys in University Hospital Limerick. He said that was worrying because they were the kind of figures he expected to see “in the depths of February or January, not in September”.

He also questioned where the jobs are going to come from in the “really ambitious plans” to recruit 12,500 with 5,000 recruitments before Christmas and 7,500 after. Mr Kelly said some nurses had come home and could not get full-time jobs.

And he asked how the 1.5 million flu vaccines would be delivered on time by Christmas.

Mr Ryan said he would have to get the information on the vaccines.

He said the Government had shown its commitment to manage the crisis with billions in funding and while it was challenging “to date we’ve managed it.”.

Tough calls had to be made on restrictions but “the primary thing is managing during the winter period”.

He stressed there were 11,000 beds in the system and “even though the numbers are rising the number of Covid beds are still relatively small”.

He said they were providing an additional €600 million for the winter period with 900 more acute beds and 50 critical care beds.

But the Minster said he was confident that based on the system for the last six months “we will be flexible and able to adapt” by including measures such as bringing private hospitals into the system as is needed.

Mr Kelly told the Minister however that “you obviously haven’t a clue. You don’t know the data”. He said the figures were announced at the press conference “but you don’t know it”.

The Minister said “I think it is more honest if you could put a series of questions as to what is the data and if I don’t have the specific data to hand or in my mind I’d prefer to say to you I’ll come back to you.

But he stressed that “it is the wider strategic approach that we have to consider” and there would be no shortage of support of flexibility learned through the Covid pandemic to make sure that our health system removes some of the obstacles there.