Kenny will seek legalisation of undocumented Irish during Trump meeting 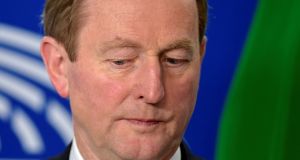 Taoiseach Enda Kenny is keen to regularise the position of undocumented Irish citizens living in the United States when he meets US president Donald Trump this week. Photograph: Reuters

Taoiseach Enda Kenny will seek the legalisation of undocumented Irish citizens living in the United States when he meets US president Donald Trump and vice president Mike Pence later this week as he kicked-off a week-long tour of the United States.

Addressing a dinner hosted by the Friendly Sons of St Patrick on Saturday evening, one of the oldest Irish associations in the United States, Mr Kenny said he would “renew the strong case on behalf of the hard-working, tax-paying Irish people in the United States who for too long now have been living in the shadows, and want nothing more than to continue making their contribution to this great country.”

While conceding immigration reform was a “politically sensitive issue” he said a US immigration system that addressed the needs of the undocumented Irish would be of “huge benefit” to America.

Mr Kenny, who arrived in Philadelphia on Saturday afternoon, was the guest of honour at the private dinner which was held just outside the city.

He is due to take part in the annual St Patrick’s Day Parade in downtown Philadelphia today before flying to Boston on Sunday.

In his speech to the 246 year-old association Mr Kenny referenced the centuries-old ties between Ireland and America, recalling the words of president John F Kennedy who spoke of the “emerald thread” that runs between Philadelphia and Ireland when he addressed the association 60 years ago.

“I am very grateful that you did so - her record of service to Ireland is stellar and in honouring our Ambassador you honoured the leadership of all women,” he said.

Mr Kenny also touched on the economic and political challenges facing Ireland during his speech. While there may be “troubled waters ahead” following Britain’s decision to leave the European Union he said, the Taoiseach added he was “confident that we are prepared to withstand the challenges ahead.”

On the issue of Ireland’s economic relationship with the United States, Mr Kenny made no mention of the Trump administration’s imminent tax reform which could hurt US investment into Ireland.

Instead he highlighted the strong economic links between the two countries, noting that US companies employ up to 150,000 people in more than 700 operations in Ireland.

Similarly, he also stressed the role played by Irish companies in the US economy, noting that close to 100,000 Americans are employed by 700 Irish companies working across all 50 states of America.

Mr Kenny is due to meet Mr Trump for the first time on Thursday at a series of events at the White House and Capitol Hill to mark St Patrick’s Day. A number of senior figures in the Trump administration have Irish-American ancestry, including vice president Mike Pence, chief strategist Steve Bannon, White House counsellor Kellyanne Conway and press secretary Sean Spicer.

Mr Kenny’s meeting with Mr Trump will take place on the same day as the US president’s controversial executive order on immigration is due to come into force, halting immigration from six Muslim-majority countries.

Anxiety has been growing within the Irish-American community in the United States since the election of Mr Trump who has pledged to clamp-down on illegal immigration.