All ministers from Ireland, except for Shane Ross, will be abroad on St Patrick’s Day trips next week 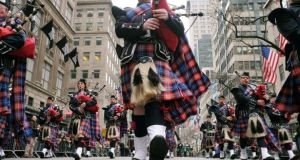 There are no contingency plans to bring Government ministers home early from their St Patrick’s day trips if the UK triggers Brexit next week.

British prime minister Theresa May could initiate her country’s exit from the EU as early as Tuesday if Westminster passes the authorising legislation on Monday to enact article 50, the mechanism for withdrawing from the union.

If Brexit is triggered on Tuesday or Wednesday as is widely expected, it will coincide with every Irish minister and junior minister, except for Shane Ross, being out of the country on the annual international visits for St Patrick’s Day.

A spokeswoman for the Department of The Taoiseach confirmed on Saturday that there was no contingency plan in place to bring ministers home early to deal with the triggering of article 50.

“The Government has undertaken extensive planning for Brexit. This includes possible time frames for the formal start of this process - which is to happen before the end of March according to the British Government.

“The visits by Irish Ministers during St Patrick’s week are a centre piece of our international celebrations of Irish culture and an important opportunity to promote Ireland in terms of exports, tourism and investment. There are no plans to alter these visits.”

Junior minister for training and skills John Halligan said on Saturday that he did not think bringing ministers home early would serve much purpose.

“If the first gathering (of EU leaders to discuss Brexit) does go ahead in Brussels on April 6th as suggested I’m not too sure that moving the date forward will make much of a difference at this stage,” he told The Claire Byrne Show on RTÉ radio.

“All ministers are required to be on a day’s notice to return back to the country if need be,” he added. “Most of the senior ministers by the way will be in Europe. ”

Mr Halligan, who will be in Brazil for St Patrick’s Day, also said he has no problem with a minister for Brexit being appointed and suggested one might be needed in the future. The Government has so far refused to appoint a dedicated Brexit minister despite calls from the opposition to do so.

“All of the senior ministers are more than capable of dealing with it, we all are because we’ve all been thoroughly briefed on what might or might not happen with Brexit,” Mr Halligan said.

“Situations can change. It may come to the point where we may have to appoint a Brexit minister.”

So far Ms May has refused to indicate when she will trigger Brexit except for repeating that it will happen before the end of March. Taoiseach Enda Kenny asked her for a date directly during a summit in Brussels on Friday but she declined to be more specific.

This would allow her to announce the triggering of article 50 during a speech to the parliament on Tuesday when she is expected to brief MPs on Friday’s EU summit.

The triggering of article 50 will be followed 48 hours later with the release of guidelines from the European Council for the Brexit negotiations. These will then be voted on by the council on April 6th.

It is Ireland’s hope that the guideline make specific mention of its relationship with the UK and the specific challenges it faces as a result of Brexit.

Six counties register no coronavirus case over past week 15:26
First ever woman president of an Irish university appointed at University of Limerick 14:58
Varadkar accused of naivety over ‘Covid penalty’ on mortgage holders 14:26
Learner drivers could be forced to take driving lessons to renew permits 13:20
Covid-19: Small minority of pubs putting health of customers and staff ‘at risk’ 13:05

1 Donald Trump is an amateur populist – the real trouble is yet to come
2 Mother and five children sleeping in car while seeking accommodation
3 Six counties register no coronavirus case over past week
4 Covid-19: Small minority of pubs putting health of customers and staff ‘at risk’
5 Ex-Fianna Fáil TD apologises to Mary Lou McDonald over ‘damaging’ tweet
Real news has value SUBSCRIBE