Adams to raise treatment of women and refugees with Trump 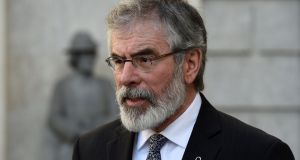 Gerry Adams plans to raise Donald Trump’s treatment of women, refugees and minorities with the US president if he gets the opportunity during a visit to the White House next week. Photograph: Reuters

Gerry Adams plans to raise Donald Trump’s treatment of women, refugees and minorities with the US president if he gets the opportunity during a visit to the White House next week.

Speaking in Dublin ahead of a Sinn Féin Ard Chomhairle meeting on Saturday, Mr Adams said he has not personally received his invitation to the traditional St Patrick’s Day White House event but that “it’s in there somewhere.”

The Sinn Féin leader said he doesn’t know if he will get an opportunity to speak with Mr Trump but that if he does he will raise various criticisms of his campaign and his actions since taking office in January.

“I have written to the president outlining our opposition to the stance that he took on women, ethnic minorities, on refugees, on immigrants both during the election campaign and since he has come into the post. If I have the opportunity to speak with him I will remake those points.”

Mr Adams said he will be joining Taoiseach Enda Kenny at the 500 guest event in the White House which will take place the day before St Patrick’s Day, the same day as President Trump’s revised travel ban is due to come into effect.

Mr Adams also gave a guarded welcome to the Taoiseach’s criticism of the British government’s approach to implementing Brexit.

On Friday Mr Kenny expressed frustration with British prime minister Theresa May’s vague answers about what relationship Britain will have with the European Union after it leaves.

“I speak in respect of the Irish Government and the Irish people, we didn’t cause this,” Mr Kenny said. “We have to put up with the consequences of it.”

On Saturday Mr Adams said: “I want to welcome what the Taoiseach said last night when he expressed some impatience with the British Government. But I also want to say that he’s too slow.

“This is the problem with the government, they’ve been mesmerised and waiting to see what the British Government might do. It should be about what the Irish Government is going to do. That’s why the all island focus is imperative and why the special designated status of the North within the EU should be the objective.”

Speaking with Mr Adams, Sinn Féin leader in the north Michelle O’Neill said the party is not backing down from its position that DUP leader Arlene Foster cannot be the First Minister in any new Stormont government.

Ms O’Neill said Ms Foster cannot led a power-sharing government until an inquiry into the “cash for ash” RHI scandal is completed.

Ms O’Neill said her party will continue to negotiate a government with Ms Foster as the leader of the DUP but that she should not put herself forward as a candidate for First Minister.