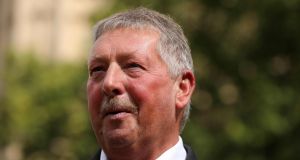 DUP MP Sammy Wilson: ‘We don’t feel we are alone on this. There will always be a residual, albeit not very many, but 30 or 40 within the Conservative Party, who would say: ‘We draw a line on that’.’ Photograph: Isabel Infantes/AFP/Getty

Boris Johnson would face “sizable” internal Tory opposition to a Northern Ireland-only backstop even if his party did not require unionist support after an election, DUP MP Sammy Wilson said.

There has been growing speculation that an alternative to the backstop – the insurance policy to avoid a hard Irish border – might lie in a compromise around the arrangement applying to Northern Ireland only.

This option was offered by the EU early in the Brexit negotiations but the DUP rejected it, pushing Theresa May to pivot towards a UK-wide backstop for which she failed to secure parliamentary support.

The DUP argued that tying Northern Ireland to EU economic rules to avoid a hard Irish border would separate it from the rest of the United Kingdom and effectively put a border down the Irish Sea.

Mr Wilson said this would be “a dealbreaker” for his party as it would leave the people of Northern Ireland subject to EU rules with no means for local representatives to approve, reject or change them.

The East Antrim MP said that it would be “a mistake” for Mr Johnson to pursue the Northern Ireland-only option that would align the North’s rules with the EU should the Conservatives win a majority in a general election that Mr Johnson wants and no longer require DUP support.

He warned that the British prime minister would lose “quite a few people” in his own party if he did. He said the DUP had built alliances at Westminster.

“We don’t feel we are alone on this. There will always be a residual, albeit not very many, but 30 or 40 within the Conservative Party, who would say: ‘We draw a line on that as well, it is not just the DUP, so you have got us to contend with’, ” Mr Wilson told The Irish Times.

“For all of those reasons, it might still be a parliament where there is not a very big majority for the prime minister but that he has sizable number of his own party who are sympathetic to our unionist point of view and that he needs those to get anything through.”

Mr Wilson said the DUP supported cooperation in a north-south agri-zone “to make sure we try to have laws aligned” but that the final decision would rest with the Northern Ireland Assembly.

“This is an arrangement where the Northern Ireland Assembly could cooperate in ensuring that there is as little friction as possible,” he said.

Mr Johnson said last week there was a “germ of an idea” behind a common food and agricultural zone across Ireland, rekindling speculation that a Northern Ireland-only backstop might break the deadlock.

Naomi Long, leader of the Alliance Party, expressed concern at Mr Johnson’s remarks in Dublin that a no-deal Brexit would represent “a failure of statecraft, for which we would all be responsible.”

Speaking outside Westminster, she said she suspected that Mr Johnson was pushing the Brexit process into the “apportioning blame phase” and that he was trying to find people to blame rather than a deal.

“I believe we have a prime minister who is committed to a no-deal Brexit but desperately doesn’t want to be held to account by the electorate for a no-deal Brexit,” she said.

“I suspect if he could find a way of blaming Ireland, the EU and MPs in the House of Commons for whatever fallout there will be after that, that he will use every opportunity he has to do that.”