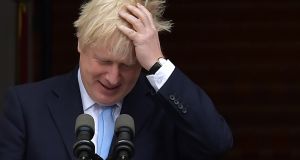 At least he turned up when he said he would.

Which counted as a good start.

Supporters of the British prime minister may refuse to accept their man has an open relationship with the truth but to the unblinkered eye, the phrase “he couldn’t lie straight in the bed” was invented for Boris Johnson.

Not so, say his acolytes. He is not a liar. He is verité fluid.

But of course, Johnson was never going to welch on his Monday morning appointment in Dublin with the Taoiseach. He’s not gone the full Trump, yet, even if opponents back in London were darkly predicting this is only a matter of time after his government confirmed it was suspending parliament for over a month.

Nonetheless, when Johnson’s arrival ran slightly behind schedule, doubts began to creep in. Because you never know with Boris, do you?

It’s why Leo Varadkar needed to be clear and unambiguous when laying out Ireland’s stance on the Border backstop (among other issues) when he had a captive audience in the new UK PM on the steps of Government Buildings.

“What we cannot do and will not do - and I know you understand this - is the replacement of a legal guarantee with a promise” he told his British counterpart, no offence and all that.

But while Johnson was physically present at the adjoining microphone, it’s debatable whether the Taoiseach had his undivided attention. Throughout Varadkar’s polite but pointedly realistic assessment of the Brexit state of play, his guest fidgeted and grimaced and smirked, eyes scanning the rows of journalists as if trying to find a friendly face in the crowd. In contrast, the Taoiseach turned his face towards his fellow leader and listened intently while he spoke.

In tone, style and look, the two men couldn’t have been more different. That shouldn’t really matter - Bertie Ahern was celebrated for his beloved anorak and stage-Dubliner approach but he won three general elections on the trot and won respect on the international stage. Before he became Taoiseach and acquired an assistant to smarten him up, it wasn’t unusual to see Bertie’s shirt hanging out. He didn’t have to work at it.

Leo is a different kettle of Canali. He looked very smart in his close cut suit as he prepared to greet his honoured guest. When Boris got out of the car and bounded up the steps, baggy of trouser and untethered of shirt, a male voice arose from the ranks of the Irish media.

“Jaaaysus, would ya look at the state of him.”

That was rather unfair. It takes effort to maintain such a low standard.

It was very cordial between the two as they warmly shook hands and faced the cameras. Boris, a la Trump, remarked to Leo that the journalists were very well behaved.

On to the statements, Crumplestiltskin mussing up his hair and swinging his arms and making faces while the Taoiseach administered a dose of reality from outside the Westminster bubble.

This meeting was a long time coming. Johnson became prime minister back in July but somehow he never managed to visit his nearest neighbour at a very difficult time in their shared history.

But never mind. He was here now and scattering optimism and enthusiasm about like fairy dust.

Brexit will work out well for all concerned. Boris will overcome the backstop and will lead the UK out of Europe on October 31st despite what the law might say. “I’m absolutely undaunted by whatever takes place in parliament” he declared.

Sure what means parliament to a man who left Dublin to return to Westminster so he could suspend crucial proceedings for a month - to BoRogue the institution, as the technical term goes.

“We gotta get on and do this….and that is what will get done” said Boris, blathering on while saying nothing about what his government intends to do to solve the backstop conundrum blighting Blighty’s Brexit. “I genuinely think it can be done. I think there is a way forward and I’m delighted it’s been approached in a positive way by governments around the EU, but particularly, obviously, here in Dublin.”

Less of the “can do” rhetoric and more candour was what the aforementioned Ireland and the EU wanted. It wasn’t forthcoming.

Varadkar said patiently he is ready to hear “constructive ways to achieve our agreed goals and resolve the current impasse.”

Boris said he couldn’t reveal them as he can’t give the game away because, er, he doesn’t have a single viable proposal. At least not one that isn’t bound up in the political future of Johnson and the posterity planning of his handler, Dominic Cummings.

He wasn’t best pleased with the impertinence of journalist Kevin Doyle who questioned the bona fides of his concern for the Irish Border, wondering when was the last time he visited the area. Does he still think traversing it is “like crossing from Camden to Islington?”.

This, after the Indo man opened with a haymaker. “Prime minister, when you talk about people being found ‘dead in ditches’, there’s a sense in this country that you really don’t understand what’s at stake here.”

Johnson petulantly rolled his eyes like a schoolboy getting an ear-bashing from the headmaster.

We half expected him to say he had been misheard and what he actually said was “I’d rather dine in Shoreditch than ask the EU for a Brexit extension”. But his heart didn’t seem to be in it.

Earlier though, when enthusiastically empathising with Border residents, he drew on personal experience “as someone who went to the Border several times before the Belfast Agreement and shuddered to see watchtowers on UK soil.” That was over 20 years ago.

Last year, he said managing that fragile frontier would be no more difficult than administering the congestion charge between London boroughs. He wasn’t shuddering then.

On Monday, Johnson answered nothing and had nothing new to say.

But he really wants to get on with it.

“Our governments have spent three years masticating this problem. I think it is time to honour the achievements of our predecessors who tackled far worse problems by cracking this one ourselves.”

After masticating for three whole years, it’s a wonder Boris Johnson could see his breakfast, let alone chew it.

Perhaps mastication was on his mind because Leo Varadkar mentioned his hero, Winston Churchill. The Taoiseach also mentioned that he is also an admirer of the “great” man. (You can’t say he wasn’t trying to charm his guest.) Churchhill famously talked of jaw jaw and not war war. That must have brought mastication to mind.

After the brief Q and A session, the two leaders repaired upstairs for breakfast. But first there was a photocall when Johnson signed the guest book. He looked at the previous pages. “Michel Barnier” he noted. “A-ha!” he cried triumphantly, as if rumbling some dastardly plot.

And he did. Leo has been collaborating with the EU.

The visit was done and dusted within a couple of hours. The Magic Roundabout spun again and Boris Johnson returned to London to resume his lead role in Carry On Regardless.

He must have been relieved to move on. When he stepped off the roundabout in Dublin he looked dizzy, like a dishevelled Dougal, aimlessly waffling around in circles without the calming magic of Cummings, his Zebedee.

The prime minister didn’t look or sound good alongside the measured Varadkar, who answered questions clearly and didn’t rely on waffle. The Taoiseach even treated him to a touch of the Classics, putting him on notice that negotiation post-Brexit is “going to be a herculean task for you” adding “We want to be your friend and ally - your Athena - in doing so”.

It didn’t take long for the Google scholars to find out that Athena intervened after Hercules went mad and killed his wife and children, saving him from committing further atrocities in his madness.

Leo’s speech writer lectures in history in Trinity College. Irish and American history. The Taoiseach added the reference to Greek mythology in the final draft. Purely “to be constructive” stressed a colleague.

Our eyes have seen the glory of the Cummings’ stooge abroad.