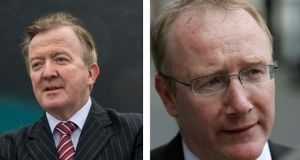 Former Fine Gael TDs John Perry and Frank Feighan will face a tough battle to get on the party’s ticket in Sligo-Leitrim for the next general election when members vote in a selection convention on Thursday night.

Former Fine Gael TDs John Perry and Frank Feighan will face a tough battle to get on the party’s ticket in Sligo-Leitrim for the next general election when members vote in a selection convention on Thursday night.

The party is likely to choose two people to go forward but eight contenders are now in the running after anti-fracking campaigner Eddie Mitchell decided to drop out.

The convention, at the Clayton Hotel, Sligo, is expected to run late with Fine Gael eager to make sure there is no repeat of what happened when last it chose candidates for the constituency.

The 2015 convention sparked a crisis for the party when Mr Perry, then a TD, took a High Court challenge after failing to gain a spot on the ticket, claiming he had been unfairly treated. He later settled with the party and unsuccessfully contested the election.

He insists the fallout from that controversy will not affect his chances but party insiders believe Leitrim-based Gerry Reynolds, also a former TD, and Noel Merrick, the chairman of the party’s executive in the constituency, are best placed.

Mr Feighan currently Senator, conceded he had a battle on his hands to be selected. His base is in north Roscommon is home to fewer than 80 of the 1,100 delegates entitled to vote at the convention.

“It is a challenge,” he said, adding that he had never lost an election. “In fact I have always been the leading Fine Gael vote getter and brought Denis Naughten in twice.”

Party headquarters is expected to direct that two candidates be chosen - one from the Sligo/south Donegal part of the constituency and the other from the Leitrim/north Roscommon end.

Mr Merrick is not a household name but his long association with with the party and base in Sligo town are seen working to his advantage. About 330 delegates are based in south Sligo with 277 in Sligo town and north Sligo.

Mr Reynolds, who missed out on the last seat in 2016 by a margin of some 400 votes, will be hoping for support from delegates from his native Ballinamore and Carrick-on-Shannon.

Other contenders include former senator Michael Comiskey; Sligo-based councillor Sinead Maguire, the only woman seeking nomination; Blaine Gaffney, a parliamentary assistant to Mr McLoughlin, who is not seeking re-election; and councillor Hubert Keaney.