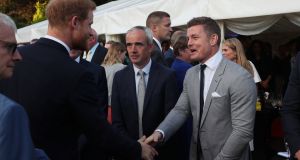 A visit by former captain of the Irish rugby team Brian O’Driscoll to an Orange march has been praised for “making a difference” to north south relations.

The former Irish and British Lions captain visited the Loughgall, Co Armagh, parade and played the Lambeg drum at the July 12th parade.

Unionist Senator Ian Marshall characterised O’Driscoll’s attendance at the parade as the “most striking and important” incident last week.

The Taoiseach’s nominee had paid tribute to Minister of State Brendan Griffin who attended the Belfast Orange parade and said it was a “huge gesture”.

He also said it was of “huge significance” that Tánaiste Simon Coveney had visited Derry after the violence and trouble that erupted there.

But he said “the most striking and important thing for me last week, was the former captain of the Irish rugby team [AND] . . . British and Irish Lions who attended a parade in Loughgall and was on a social media video where he played a Lambeg drum.

“And it was a clear indication that actually these gestures as much as some people think them as being just token gestures, they make a difference.”

Meanwhile, other Senators called for Sinn Féin to review its policy of abstentionism in the wake of the votes at Westminster when MPs voted by a majority of three for an amendment to a customs Bill, making it unlawful for the North to be part of a separate customs union from the rest of the UK.

Fianna Fáil Senator Gerry Horkan said that Sinn Féin might want to attend Westminster on occasion “because if the party’s seven MPs had been present yesterday, the vote could have been overturned”.

But Sinn Féin Seanad group leader Rose Conway-Walsh said “the people choose to vote for abstentionist MPs and the people also chose to vote against Brexit. And both mandates need to be respected.”

The Mayo Senator said if members of the House felt so strongly about it “they should certainly put themselves before the people and seek a mandate from the people in the North”.

She said “Sinn Féin will continue to do everything it can to ensure the rights of Irish citizens in the North are protected and that jobs and enterprises are protected”.

But Labour Seanad leader Ivana Bacik said it was “a bit rich” for Sinn Féin to say to say that it will do everything it possibly can to ensure the rights of citizens in Northern Ireland are protected when it will not take up its seats at Westminster”.

Sinn Féin’s Máire Devine said Senators should “give it over. It’s a record that needs to stop.”

Ms Devine said “Senators should open their ears, go to the North, listen to what people want and not sit here on their cosy fence and decide what they will try to attack Sinn Féin with”.

Seanad leader Jerry Buttimer said Sinn Féin changed its abstentionist policy towards the Dáil and “they should take it as a criticism that we now have no voice representing nationalists or moderate unionists in the House of Commons”.

Sinn Féin Senator Paul Gavan asked him “why doesn’t Fine Gael end its own policy of abstentionism” and organise in the North?